She also spoke about the growth of Georgian economy in 2019 and said that preliminary data shows the Georgian economy grew 5.2 per cent in 2019, which is more than the IMF forecast of 4.6 per cent.

Georgian export increased by 12 per cent in 2019, while import has not increased noted Martin, adding that the current account deficit (a measurement of a country’s trade in which the value of the goods and services it imports exceeds the value of the products it exports) decreased to 4.4 per cent of the gross domestic product (GDP).

Georgian inflation amounted to 7 per cent in the end of 2019, while it decreased to 6.4 per cent in January 2020, compared to the same period of last year, noted the IMF mission Chief Mercedes Vera-Martin.

She noted that the forecast shows that the inflation in Georgia will be close to the targeted annual inflation of three per cent in the end of 2020. 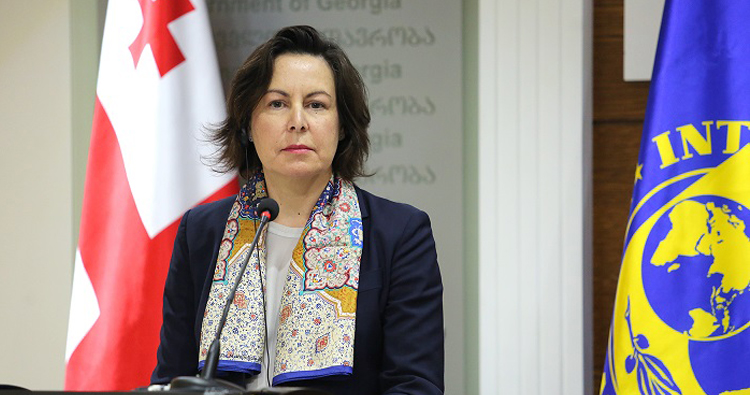 Martin noticed that the IMF supports the tight monetary policy (decreasing money supply and the amount of money banks have to lend, in order to slow down economic activity) implemented by the National Bank of Georgia.

Despite the increase of the refinancing rate, the National Bank of Georgia has sold $20 million in November 2019 as the Georgian lari continued to depreciate.

Despite the tightening of monetary policy, the growth rate of lending continued to be maintained, partly due to the decline in foreign currency reserve requirements for banks,” said Martin.

Martin also expressed the IMF’s support to the responsive fiscal policy (the government adjusts its spending levels and tax rates to monitor and influence a nation's economy) implemented by the Georgian government.

She noted that the fiscal deficit (a shortfall in a government's income compared with its spending) is forecast to grow to 2.4 per cent of GDP while it was 2.1 per cent in 2019.

The International Monetary Fund mission led by the IMF mission Chief Mercedes Vera-Martin was in Georgia on February 5-11, 2020.