Only three of 12 key institutions in Georgia have  been highly assessed by TI in a report on facilitating democratic governance and preventing corruption in Georgia, reads the National Integrity System (NIS) assessment published by Transparency International Georgia, which covers the period between 2015 and 2020.

The Public Defender, the State Audit Office, and the Electoral Administration, which have a high or fairly high final score in the NIS assessment, were studied based on the following indicators: 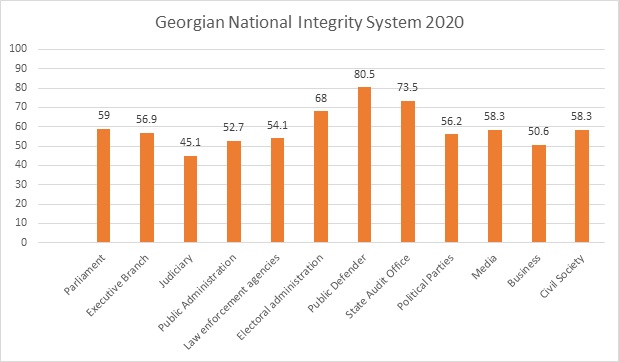 The report reads that public agencies often do not follow the recommendations issued by the State Audit Office. Photo: Infographic/TI Georgia.

The significant problems identified in the report include:

Since the existing law enforcement system is incapable of investigating the cases of high-level corruption effectively, Georgia must establish an independent anti-corruption agency which will be protected from any undue interference in its activities. It could be a multi-functional agency, combining the investigative role with corruption prevention and policy planning roles”, reads the official statement of TI Georgia.

TI  says  in order to establish a genuinely independent and professional civil service, the government must refrain from any type of undue interference in the work of civil servants and must ensure that employment and promotion in public administration are based ‘exclusively on the professional criteria established by the law’.