PM Gakharia: it’s unacceptable for me that so-called politicians who committed crimes were pardoned

Georgian Prime Minister Giorgi Gakharia has responded to the recent pardon of opposition leaders Gigi Ugulava and Irakli Okruashvili and stated that it is unacceptable for him that ‘so-called politicians, who committed serious crimes, were pardoned only because they are in politics.’

He stated that Ugulava and Okruashvili, ‘who never deserved to be released as they committed concrete crimes’, will use the release for politician speculations, for fighting for seats in parliament and will never care about the state interests.

They will use the release for their narrow political interests and not for the Georgian people. However, our people are wise and the elections will show everything,” Gakharia said.

However, Gakharia said that the pardon is the legitimate right of the president.

He stated that now the Georgian government is focused on defeating the coronavirus, restoring the state economy and conducting the upcoming elections in a peaceful environment.

Speaking about the issue (about the pardon), despite my emotional position, is of secondary importance, as the primary goal for now is to defeat the coronavirus. It is too early to think that the coronavirus is defeated and the country’s economic recovery is guaranteed. Even the biggest economies and the strongest countries are in an unclear situation,” Gakhrai said. 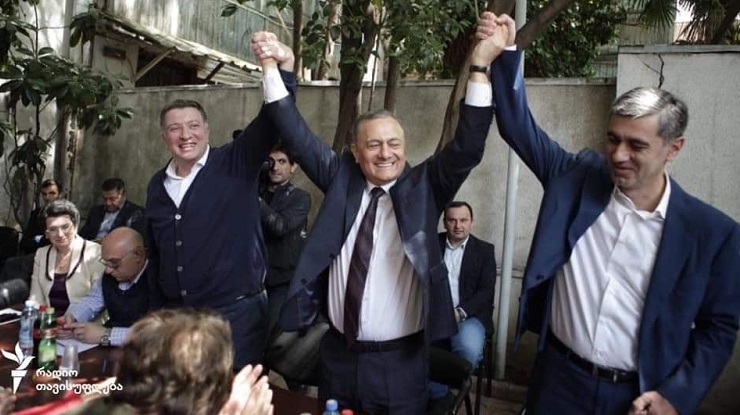 He stated that amid the global crisis the responsibility of the governments of smaller nations has increased ten times.

That is why we are absolutely mobilised to defeat the coronavirus, which is not guaranteed of course, then to help the state economy to recover and then to hold the parliamentary elections in a peaceful environment,” Gakharia said.

Several MEPs have welcomed the pardon of the opposition leaders earlier today, stating that the step by the president will help the country’s democratic advancement.

Ruling party MPs, who call Ugulava and Okruashvili ‘criminals and budget thieves’ have stated that the MEPs who welcomed the release of the opposition leaders are likely not to be well aware of the cases.

They once again invited the MEPs to Georgia to look into the cases.

The opposition say that Ugulava and Okruashvili were ‘political prisoners’ and the MEPs and the international community ‘have shown a red card’ to the ruling party.

On May 15 President Salome Zurabishvili pardoned Ugulava and Okruashvili as she said to ‘discharge the situation.’

Zurabishvili stated although she is very well aware of the ‘real actions and crimes’ of the two former officials, Ugulava and Okruashvili, nevertheless, as the president, she was pardoning them for the sake of 'the country’s interests’.