Georgian FM David Zalkaliani, who opened the French-Georgian Dimitri Amilakhvari dialogue format earlier today, has stated that peace, security and stability in Europe are unlikely without a safe and protected Georgia, Ukraine and Moldova.

He said that 11 years since the Russia-Georgia war, Russia still refuses to fulfill the August 12, 2008 ceasefire deal signed with Georgia, mediated by France and 20 per cent of historic Georgian territories remain occupied by the country.

It’s alarming that 30 years since the collapse of the Berlin Wall we have to speak about barbed-wire-fences [erected by Russia] cutting the territories of Georgia, Ukraine and Europe, about the people whose lives were claimed by occupation forces, about a half million people [in Georgia] who were forced to leave their homes due to ethnic cleansing and are unable to return back to Georgia’s two Russian-occupied regions of Abkhazia and Tskhinvali,” Zalkaliani said.

Zalkaliani stated that the occupation forces did not even hesitate to abduct a well-known Georgian doctor Vazha Gaprindashvili, who has been in illegal detention in occupied Tskhinvali since November 9. 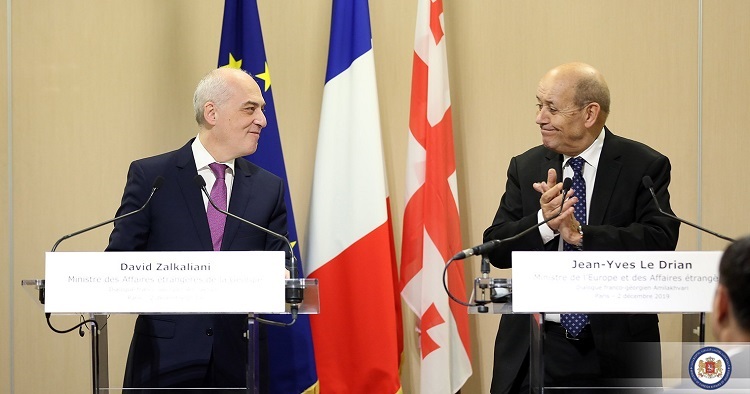 Facing the challenges, the active, effective, principal steps of the international community, especially the EU member states, France among them, play a vital role,” Zalkaliani said.

Speaking about the new dialogue format with France, Zalkaliani stated that French-Georgian relations have been upgraded to a new level.

He has thanked the French people for standing by Georgia during the war, for their continued support in different fields and for Georgia’s sovereignty and territorial integrity.