Conti International, a member of the Conti Group and the founding partner in the Anaklia Development Consortium, announced that it has “reached an agreement to sell its position in the Anaklia Port Project and exit the Consortium”.

The currently proposed transaction requires approval from the Government of Georgia and other Consortium members, neither of which have been received, and are unlikely to be received prior to the required deadline”, it said in a statement released yesterday.

Conti further noted that “as a result, the transaction cannot be closed and the time to complete it will expire at the end of October”. 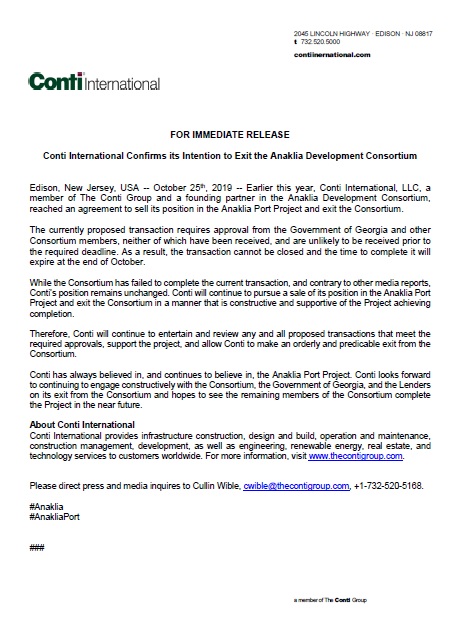 It also said that “while the Consortium has failed to complete the current transaction, and contrary to other media reports, Conti’s position remains unchanged”.

Conti will continue to pursue a sale of its position in the Anaklia Port Project and exit the Consortium in a manner that is constructive and supportive of the Project achieving completion”, the statement reads.

Conti said it will continue “to entertain and review any and all proposed transactions that meet the required approvals, support the project, and allow Conti to make an orderly and predicable exit from the Consortium”.

It also stressed that "Conti has always believed in, and continues to believe in, the Anaklia Port Project".

Conti looks forward to continuing to engage constructively with the Consortium, the Government of Georgia, and the lenders on its exit from the Consortium and hopes to see the remaining members of the Consortium complete the Project in the near future”, it concluded.

The reports that the Conti Group changed its initial decision to exit the project and decided to stay, emerged earlier yesterday.