Today’s meeting with students is very important and emotional. The students are doing their utmost to receive a better education. In crossing the so-called border they are sending a very loud message - ‘we will not be a generation beyond the barbed-wire-fences, we are the children of a united Georgia and with our education we will do our best to restore trust and state integrity,” Deputy Reconciliation Minister Lia Gigauri said.

Gigauri stated that the Georgian government has used all levers to help the students participate in the summer school.

The government will continue to do its best for the students living in the occupied regions, under huge stress and discrimination, to have the same prospects as their peers in the country,” Gigauri said. 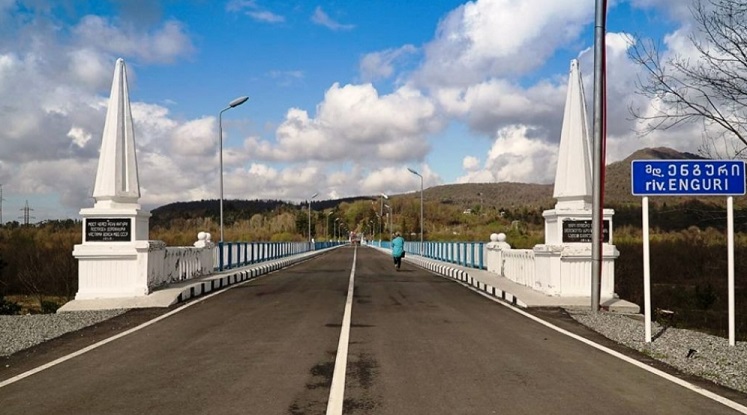 The only "checkpont" with occupued Abkhazia was closed "due to Tbilisi Protests" and has not been opened so far. Photo: 1TV.

She said that the stories told by the students were “very emotional.”

We have heard about their daily problems, discrimination and the stress they suffer continually, and how the occupying forces are trying to create obstacles for their education, movement, communication and existence,” Gigauri stated.

Students from Gali say that they feel happy in the summer school.

It was important for me to participate in the summer school. I have an opportunity to get involved in different activities and upgrade my English. We have English classes in Abkhazia only one hour a week. When other children understood that we are from Abkhazia they came and got friends immediately. I am very glad to be here,” one of the students from Gali said.

The summer school kicked off on June 23 in Tbilisi, involving 9th, 10th and 11th graders around Georgia, 600 students in total.

The school is divided into three waves, giving an opportunity to each participant have a rest and study for 14 days. During this time the students take intensive English classes.

21 students of the 600 will later be sent to Great Britain to an English language school.

After the Russia-Georgia 2008 war Gali was taken under the control of the de facto leadership of Abkhazia, occupied by Russia.