Filmmaker Alexandre Koberidze is a winner of the latest German Film Critics Association Prize after his feature Let the Summer Never Come Again was honoured by the cinema professionals at the ongoing Berlinale Film Festival on Monday.

Koberidze’s work emerged as one of two films distinguished by German experts at the annual event.

The feature, a winner of two awards at the 2017 Marseille International Film Festival, was named Best Experimental Film of last year in the German capital.

With camera- and directing work by Koberidze, the film is produced by Nutsa Tsikaridze and is a co-production effort between Georgia and Germany.

[Koberidze’s film] shows a portrait of his hometown [Tbilisi] that breaks the paradigms of the "eternity” that lead the photography of his work."

Everything in this film seems to be ethereal: the histories, the sorrow of the characters and the corporeality of the mere images [...] This is a great filmic challenge that opens our minds in what representing reality refers”, said a summary of the feature from the Murcia International Film Festival, which will screen the work this year.

The debut feature of the Georgian director, Let the Summer Never Come Again received both the Grand Prix and the Prize for Debut at the FIDMarseille festival in July. 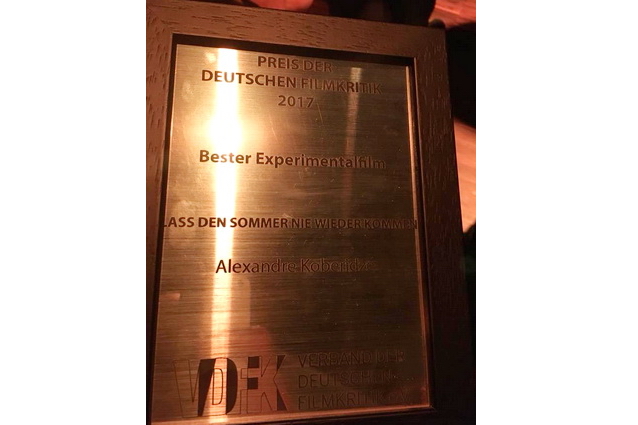 Born in Tbilisi, Koberidze studied at the Shota Rustaveli Theatre and Film Georgia State University before moving to Germany, where he graduated from Berlin's German Film and Television School.

The young filmmaker directed short productions including Looking Back Is Grace (2014) and Colophon (2015), with the latter receiving Special Mention of the German Competition at the Oberhausen International Short Film Festival.

Awarded since 1956, the German Film Critics Association Prize is the only cinema prize in Germany awarded exclusively by critics.

The awards ceremony for the prize is held within the Berlinale festival, which this year runs between February 15-25.