Ivanishvili, who resigned as prime minister in 2013 and decided to return in politics in April 2018, says that problems in the ruling team made him take the step to reenter the political world.

The team was on the verge of a split,” he said.

Ivanishvili spoke about the reasons of former Prime Minister Giorgi Kvirikashvili’s resignation, his position concerning the ruling party’s presidential candidate, his attitude towards the leading banks of Georgia, about the new government and its head, his projects and intentions, the opposition and the country’s level of democratic and economic development.

Whom should the Georgian Dream party support for president?

Ivanishvili says that if a "worthy independent candidate” appears on the stage the Georgian Dream ruling party should support them.

I am against nominating a presidential candidate from the Georgian Dream party. If such a worthy candidate does not emerge, let the opposition candidate become the president,” Ivanishvili said.

He says that the president from the opposition field "is needed for the country’s further, democratic advancement,” as the Georgian Dream holds a majority in parliament and in local municipalities. 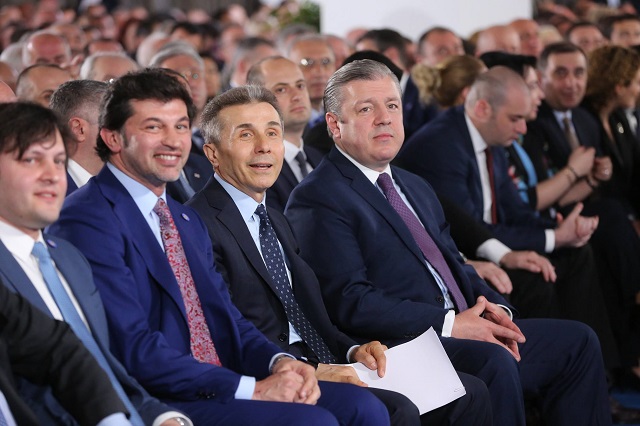 Ivanishvili says Kvirikashvili (R) was forced to leave as his methods were not effective. Photo: Georgian Dream press office.

"Kvirikashvili failed to unite the team”

Ivanishvili spoke about his support for the resignation of former Prime Minister Giorgi Kvirikashvili, as the latter "failed to ensure effective teamwork and make genuine connections between the government and parliament.”

His methods of running of the country were no longer effective,”

He said that the government may be proud that the banks are taking top positions in terms of profitability worldwide, but the fact that the Georgian people have to pay 1/3rd of their incomes for bank interests at least is "shameful.”

Ivanishvili said that Kvirikashvili hid the International Monetary Fund survey from him and the public, which also spoke about the problem of bank debts in Georgia.

Ivanishvili stated that he played his role for the selection of the current Prime Minister Mamuka Bakhtadze, who was "distinguished with his innovative ideas and initiatives as the minister of finance.”

Bakhtadze is trying to ensure maximal communication between government and parliament which is essential as Georgia is a parliamentary republic,” Ivanishvili said.

He also said that Bakhtadze is eager to have every day communication with all the cabinet ministers, which is likely to lead to effective, teamwork. 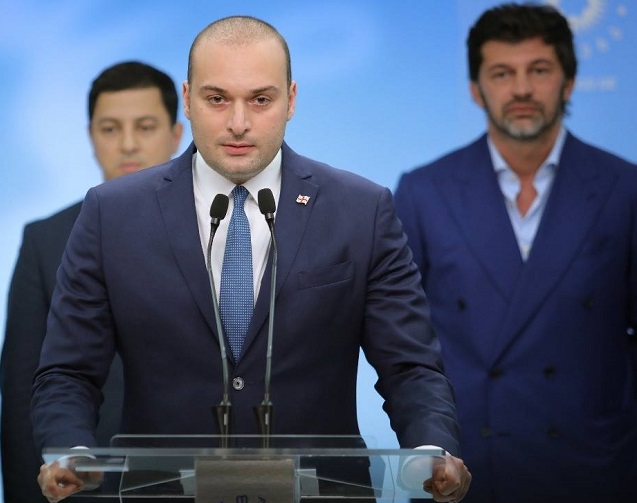 Ivanishvili says that he liked Mamuka Bakhtadze as a finance minister and supported him to become a new prime minister. Photo: Georgian Dream press office.

"The opposition is trying to mislead people"

Ivanishviliu says that "unfortunately, Georgia has no constructive opposition, which could be fair in its criticism and assessments.”

He also says that  the opposition members are trying to persuade people that he is making certain projects for his own income and benefit.

There have been dozens of projects I have carried out with my own money and then gift them to the state. Now  the opposition is telling people that I made the dendrological park in western Georgia for myself, which is a big lie. The park will be for people when it is finished and the opposition knows this very well,” Ivanishvili said.

Ivanishvili also touched upon the Panorama Tbilisi project, which will become a "calling card” for Tbilisi with several of the most modern hotels in the heart of the city, golf fields and a ballroom which will host 3,000-5,000 people.

Tbilisi will profit much from the project, you will see that. If anyone in Georgia is ready to carry out the project I am ready to give them the land free of charge,” Ivanishvili said.

What is Georgia’s major issue today?

Ivanishvili says that the main problem for Georgia is that the country’s democratic development outpaces Georgia’s economic advancement.

He says that Georgia is a free country which has managed to develop democratic values, however, the state economy is still in trouble.

Ivanishvili believes that the main goal of the current Georgian leadership is to fill the gap.