The newly elected Prime Minister of Armenia Nikol Pashinyan has met with Georgian PM Giorgi Kvirikashvili at the administration building of the Government of Georgia in Tbilisi today, where they vowed closer and friendlier relations between the two countries.

Pashinyan, the former protest leader who took up the post of the country’s premiership on May 8, arrived in Georgia on the 100th anniversary of the First Republic of Armenia.

We declared independence and created the first democratic republics together. Two days ago we celebrated the 100th anniversary of the First Democratic Republic of Georgia and the Armenian President marked the significant date with us,” the Georgian PM Giorgi Kvirikashvili said.

Armenia’s stability and development is of the highest importance for us. That is why we’re closely observing recent developments in the country,” Kvirikashvili stated.

Kvirikashvili said that the Armenian people have expressed devoutness to unity and democratic values, which led to a peaceful change of government. 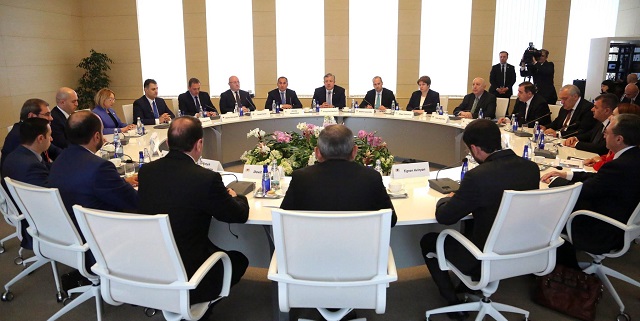 The Georgian and Armenian government members held a joint meeting, where they spoke about the high potential for economic cooperation and agreed to renew the Georgia-Armenia inter-governmental economic commission. Photo: Prime Minister's press office.

Let me wish you success in the new role. I am sure that we will manage together to give new impetus to our countries’ centuries-old friendly relations,” Kvirikashvili stated.

Pashinyan also spoke about the importance of Georgian-Armenian relations.

Our people are deeply connected and the connection is indivisible. It is not a coincidence that my first official visit took place in Georgia. This reveals not only my people’s attitude to Georgia, but also my personal attitude to the Georgian people and the country,” Pashinyan said.

Pashinyan stated that he and his administration will spare no efforts to further enhance bilateral relations with Georgia.