Lithuanian President visits Georgia as part of May 26 celebration

President of Lithuania Dalia Grybauskaite has arrived in Georgia to participate in the celebrations of the 100th anniversary of the creation of the first Democratic Republic of Georgia.

Grybauskaite is the first high official who has already arrived in Georgia to join the celebrations on May 26. Georgia is still waiting for the presidents of Poland, Slovakia, Latvia, Finland, Armenia and European Commission who will also visit the country.

We are proud of our friendship with #Lithuania. We are grateful for strong & firm support over the past decades on our #Euro-Atlantic integration path, also for supporting Georgia's sovereignty and territorial integrity. #GEO100pic.twitter.com/okOCpgpLiy

The two presidents have held a face-to-face meeting at the Presidential Palace in Tbilisi where Margvelashvili thanked Grybauskaite for officially calling Georgia its native name. Lithuania is the first country to call Georgia Sakartvelo. In response to this historic act, Georgia has officially changed Lithuania’s name to its native name Lietuva. Margvelashvili believes that these acts highlight the special friendship between Georgia and Lithuania.

Ambassador of Lithuania to Georgia responded to the fact of officially calling Liathuania its native name via his official Tweeter channel:

The conversation also touched upon preparation for the upcoming NATO Summit. Margvelashvili said that Lithuania is and has always been one of the most loyal supporters and reliable friends of Georgia that has greatly contributed to Georgia's democratic development and integration process to the European and Euro-Atlantic structures. He has also underscored Lithuania’s unwavering support for Georgia’s sovereignty and territorial integrity.

Margvelashvili has emphasised Grybauskaite’s personal role, contribution, engagement and efforts to strengthen and support Georgia's position in the international arena. As he underlined, Lithuania constantly promotes non-recognition policy of Georgia's occupied territories in various multilateral formats and always supports Georgia in the UN and other international organisations. 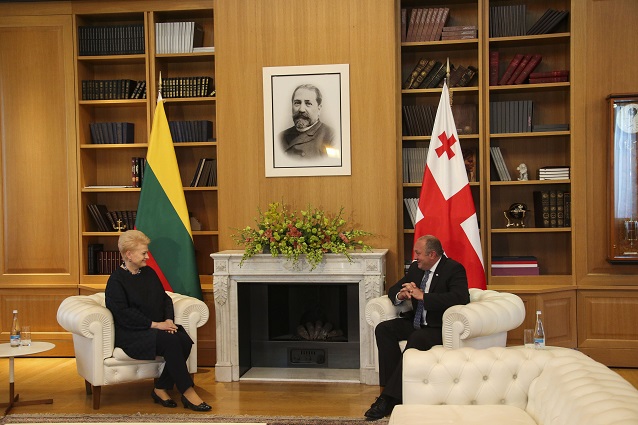 The two presidents have held a face-to-face meeting at the Presidential Palace in Tbilisi. Photo: President's press office.

Margvelashvili and Grybauskaite have highlighted the positive and harmonious development of Georgia-Lithuania cooperation in all areas. The two have also discussed prospects for strengthening economic, educational and cultural ties.

As part of the visit, Grybauskaite will visit today the Heroes Square to lay a wreath at the memorial of Georgian soldiers fallen in the fight for the country’s sovereignty and territorial integrity.