Georgia’s capital Tbilisi is hosting the second Silk Road Forum, which is being attended by around 2,000 honourable guests from all over the world.

Years ago caravans loaded with silk and spices from China traveled all the way to Europe and British Isles. Today the caravans are replaced by modern highways, railways, pipelines through which modern "silk and spices" - energy, natural resources, manufactured goods -travel.

Now China is investing about $40 billion into revitalising this route for trade.

Through this new Silk Road, Georgia will link China to Europe via the shortest way which will enable China to transport cargo to Europe. 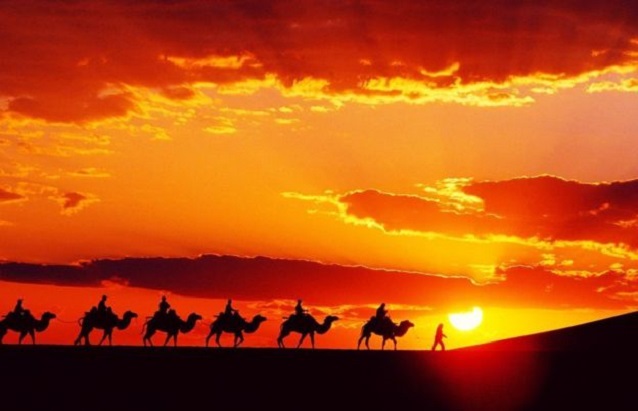 Caravan crossing Dunhuang, a city on the old Silk Roadt. Pictures by Li Zhengde and the Dunhuang Academy/BBC.

Georgia will thus be able to restore its strategic importance as a transportation-infrastructural hub of the region and will create a transit corridor between Europe and Asia.

Today and tomorrow, November 28-29, government representatives and business leaders from more than 60 countries and more than 500 foreign companies are participating in two-day forum.

The forum, titled "Belt and Road” opened today with a welcome speech by Prime Minister of Georgia Giorgi Kvirikashvili, who highlighted Georgia’s strategically important location on the crossroads of East and West and its role as a connecting link of cultures and economies.

Located at historically vital crossroads, #Georgia links economies&cultures of East&West.We have gone through fire&water throughout millennia to preserve our independence&uniqueness,w/ our spirit of tolerance,cooperation&ability to make the most of opportunities #TBilisiBRF2017pic.twitter.com/FtCleCzSh4

The Government of Georgia will spare no effort to give, in cooperation with its international partners, fresh impetus to the diversification of transport routes along the Silk Road, while raising the effectiveness of these routes, and also stepping up the implementation of projects poised to boost stronger economic and civilizational ties between Europe and Asia," promised Kvirikashvili forum participants.

Georgia is an open economy ranking 8th and 9th in the world in economic freedom and ease of doing business, respectively. We have one of the most liberal trade regimes in the world, and we enjoy free trade with all of our neighbors, the European Union, the European Free Trade Association, Eastern European and Central Asian states, and China. We are also probing into similar opportunities with India. What I am trying to say is that we are committed to maximal cooperation with every country represented here today,” said Kvirikashvili. 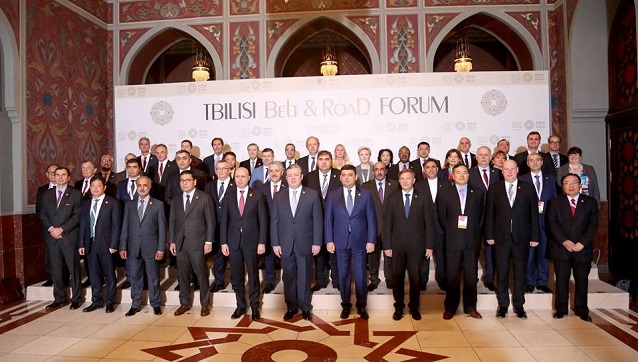 The forum, titled "Belt and Road” opened today where 2,000 honourable guests from all over the world are participating. Photo by the PM's press office.

In his speech PM Kvirikashvili once again confirmed that Georgia is ready to contribute to the development of the "New Silk Road”.

Georgia is ready to make its contribution to the development of the so-called Middle Corridor of the New Silk Road. As you know, in close cooperation with the Governments of Turkey and Azerbaijan, in October, we commissioned the Baku-Tbilisi-Kars Railway section that now connects the Central Asian states to Europe’s railroad network via an alternative route. We are investing billions of dollars in the development of a wider network of highways to increase our region’s transit potential and turn it into a key transport hub,” said Kvirikashvili.

The PM also mentioned the Anaklia Deep Sea Port project, which is being constructed in Anaklia, a Black Sea city near Georgia’s breakaway Abkhazia region and which mission is to create a new, faster maritime corridor between China and Europe, helping restore the historic Silk Road. 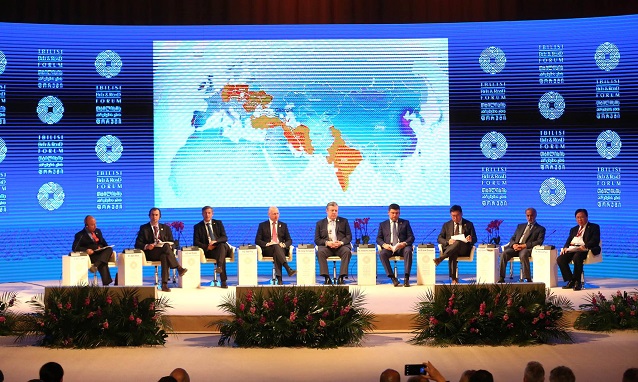 The Tbilisi Silk Road Forum aims to establish a platform for an annual high level meeting. Photo by the PM's press office.

The Tbilisi Silk Road Forum aims to establish a platform for an annual high level meeting where regional partners could get together and explore opportunities, align visions and enhance bilateral partnerships in four main areas of cooperation: transport, energy, trade and business-to-business contacts.

The Tbilisi Silk Road Forum is a joint effort by the Georgian and Chinese governments and the Asian Development Bank (ADB) to promote the sharing of ideas, experiences and expertise along the revived Silk Road and beyond.