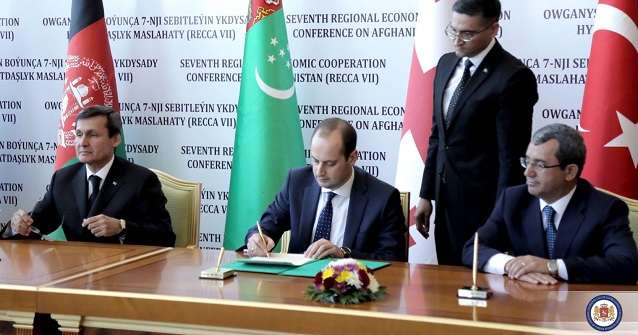 We pay particular attention to our participation in the transport route, Lapis Lazuli, initiated by the government of Afghanistan and strongly supported by Turkmenistan,” Georgian Foreign Minister Mikheil Janelidze said at the summit.

The signing of the agreement will significantly contribute to the development of cooperation between the members of the project in the areas of trade and transport and beyond. We are convinced that an important part of the region’s future lies in new corridors and projects like Lapis Lazuli,” he added.

Signing ceremony Lapis Lazuli - We are convinced that an important part of region’s future lies in new corridors and projects like Lapis Lazuli pic.twitter.com/wu0BZYkwcd

The Lapis Lazuli Corridor will begin in Afghanistan’s northern Aqina port in Faryab province and Torghandi in western Herat province and will run through to Turkmenbashi in Turkmenistan.

From there it will cross the Caspian Sea and will link the Azerbaijani capital Baku to Tbilisi and Georgia’s Black Sea ports of Batumi and Poti.

It will then connect with Kars in eastern Turkey before linking to Istanbul and Europe.

The Afghanistan Chamber of Commerce and Industries (ACCI) meanwhile said the Lapis Lazuli Corridor is the nearest and cheapest way to transport Afghan and Asian goods to Europe. It also said that 80 percent of goods to Europe will be transported by railway and also across the Caspian and Black sea by ship.