President of Estonia Kersti Kaljulaid, together with her Georgian counterpart Giorgi Margvelashvili, has visited the occupation line that divides Russian-occupied Tskhinvali region (South Ossetia) from the rest of Georgia.

She met Data Vanishvili, an elderly man from the occupied village of Khurvaleti whose house has been isolated from the rest of the village ever since the Russian forces erected barbed-wire fences in the village.

The occupation line prevents Vanishvili’s family from freely moving along the village, meeting his neighbours, reaching his agricultural lands and sometimes even from buying food.

On the line of evil - fence between #Georgia & occupied territory of South Ossetia. It can not and will not be accepted nor forgotten. pic.twitter.com/r9gygpgDGR

President Kaljulaid said that the fence between the occupied territory and the rest of Georgia is "the line of evil”.

"It cannot and will not be accepted nor forgotten”, she said.

Kaljulaid added that international efforts are needed for these artificial obstacles to be removed peacefully one day just as has happened in many other European countries. 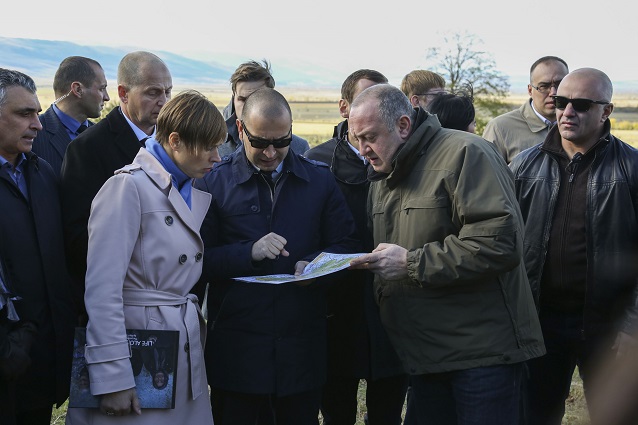 The president of Estonia and Georgia looking at the occupation map. Photo: President Margvelashvili's press office.

Today is the last day of President Kaljulaid’s state visit to Georgia that started on October 31.

Her delegation also includes the minister of Economy and Infrastructure, Minister of Culture, chairman of the Committee of Foreign Affairs of the Estonian parliament, and the commander of the Estonian Defence Forces. They are accompanies also by a business delegation of 33 members.