This year marks the 25th anniversary of Georgia’s membership in the United Nations. As Kvirikashvili said over this period, Georgia has transformed "from a UN humanitarian aid recipient to a top reformer that recently was elected as the Chair of the Open Government Partnership”.

Kvirikashvili stressed human rights protection as the key priority of the Government of Georgia.

By putting the Georgian citizens at the center of our strategy, we aim to strengthen further democratic institutions, ensure peace and accelerate economic growth,”Kvirikashvili stated.

He continued that these are the essential multipliers for sustainable development, "which connects us with the region and the world”.

Putting citizens at the center of our strategy, we aim to strengthen democratic institutions, ensure peace &accelerate economic growth #UNGA

When speaking about Georgia’s advancement in international rankings in the past five years, Kvirikashvili said: 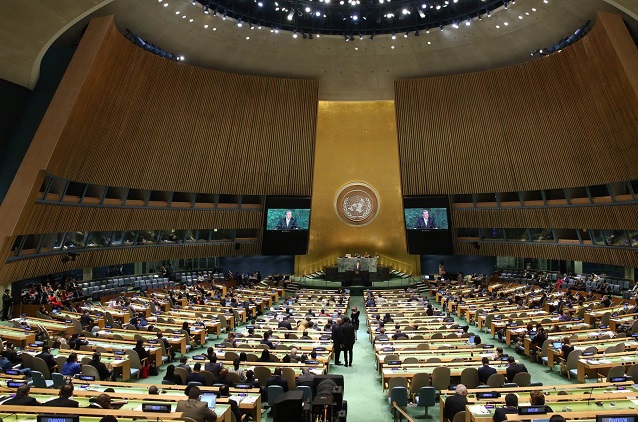 Georgia - together with Ukraine and Moldova has signed an Association Agreement with Deep and Comprehensive Free Trade Area and achieved visa-free travel to the EU. At the same time, Georgia has become the first country in the region to sign a Free Trade Agreement with China’, Kvirikashvili said.

Read full transcription of the address.

Prudent macro-economic policy has been the foundation of our success in the region’s turbulent economic environment. #UNGA#Georgia

On the one hand, we are integrating into the EU internal market and, on the other hand, we are bringing Asian markets closer to us. This enables Georgia to use the full potential of its free trade networks as part of one of the most exciting development ventures of our time”, he added.

Speaking about the hot and frozen conflicts, state and non-state aggressions, Kvirikashvili said "Georgia is no exception”. He said Russia "has intensified its policy of occupation and factual annexation of Georgian regions of Abkhazia and Tskhinvali/South Ossetia” in 2017 to "absorb Georgia’s occupied regions into Russia’s military, political, economic and social systems and accelerated its military build-up in both occupied regions of Georgia”.

The Government of Georgia is providing new instruments to rebuild trust with our compatriots living across the occupation line. We are determined to make the benefits of Georgia’s European agenda available to the people on the other side of occupation line”, Kvirikashvili said.

We are determined to make the benefits of Georgia’s European agenda available to the people on the other side of occupation line. #UNGA

The PM stated that the  substantial package of initiatives for those under occupation include providing opportunities for across-Administrative Border Line trade and access to Georgia’s free trade opportunities in the global marketplace, as well as benefits for  healthcare, education, and other social opportunities.