The second Annual Meeting of the Board of Governors of the Asian Infrastructure Investment Bank (AIIB) is taking place in South Korea; Georgia’s Finance Minister Dimitry Kumsishvili has joined top officials from 57 countries to attend the meeting.

Kumsishvili delivered a speech at the opening ceremony of the Annual Meeting where he highlighted Georgia’s infrastructural projects.

Later the minister met the Vice-Presidents of the AIIB D.J. Pandian and Danny Alexander.

We have the full support from the AIIB in implementing structural reforms as well as infrastructural projects,” said Kumsishvili after the meeting. 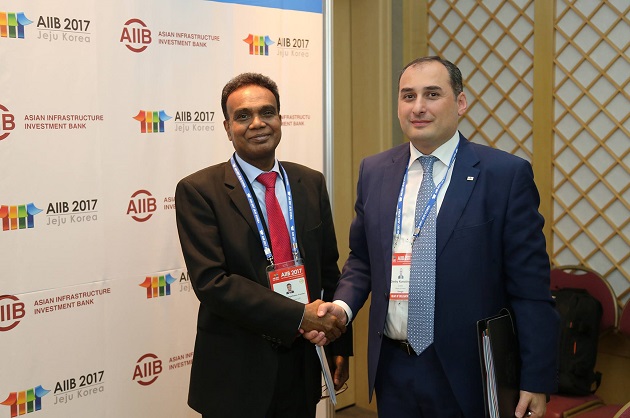 Meanwhile, tomorrow Georgia and the AIIB will sign a financial deal about helping Georgia construct the Batumi Bypass Road in the country’s Adjara region, with a $114 million financial resource.

The AIIB is a multilateral development bank that focuses on the development of infrastructure and interconnectivity in Asia.

The China-led bank opened in 2016 in China’s capital, Beijing.

The 57 member nations, including Georgia, have contributed $100 billion in capital to the AIIB, making it nearly half the size of the World Bank as it begins operations. China provided 30 percent of the new bank's capital, the largest share.