Lithuania’s Foreign Minister: “Georgia is mature and ready for visa-free travel to EU”

Linkevicius also reaffirmed his support for Georgia’s Euro-Atlantic integration aspirations and expressed hope the upcoming NATO Summit in Warsaw would adequately reflect Georgia's prospects for integration into the alliance. 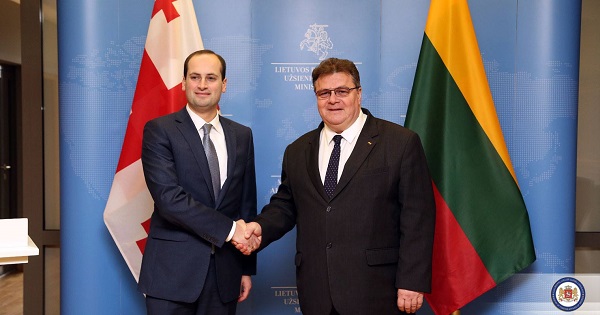 For his part Janelidze thanked Linkevicius for Lithuania’s unequivocal support for Georgia’s sovereignty, territorial integrity and European and Euro-Atlantic integration.

At the meeting the ministers underlined the recent increasing dynamics of bilateral cooperation between the two nations in trade, education and cultural spheres and noted trade turnover between Georgia and Lithuania was increasing year-on-year.

Special focus was also made on the ongoing bilateral cooperation in the education sector and Lithuania’s contribution towards tuition fees of Georgian students.

Afterwards Linkevicius hosted Janelidze at Pazaislis Monastery in Vilnius, which had special ties to Georgia. Georgia’s first Patriarch Kirion II served there as head of the Monastery in 1907-1908.

Copies of materials preserved in Kirion II’s archives in the Monastery were handed to the Georgian official.

While in Lithuania Janelidze visited the memorial of those who had died for Lithuania’s independence, and he also visited the grave of Datiko Machavariani, a Georgian officer of the First Republic of Georgia (1918-1921).

The famous Georgian public and military figure intended to emigrate after Russia occupied Georgia in 1921. He settled in Lithuania’s capital Vilnius and served in the national army. For his professional service and dedication, Machavariani was granted the title of Major. 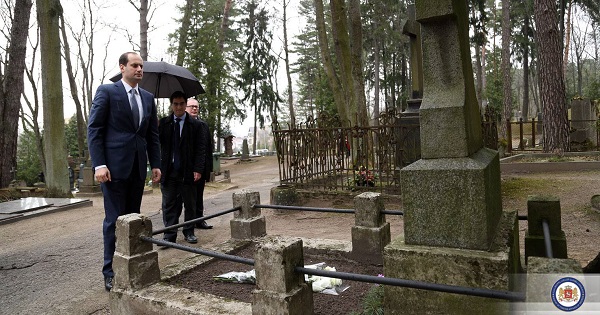 Minister Janelidze visited the grave of famous Georgian military and public figure, Datiko Machavariani in Vilnius. Photo by the Ministry of Foreign Affairs.

Meanwhile before Janelidze returned to Georgia later thisafternoon, the Georgian official will meet representatives of Lithuania’s legislative and executive branches and deliver a speech about Georgia's European Way at Vilnius University.