Switzerland, Norway, Iceland and Liechtenstein – combining 14 million consumers – are opening their markets to Georgia from the beginning of 2017 when a new free trade deal comes into play.

Today Georgia successfully completed the third and final round of negotiations with the European Free Trade Association (EFTA), meaning Georgian products will soon be exported to the four EFTA member nations without customs fees.

Today’s negotiations ended with the approval for Georgia to sign a free trade deal with the EFTA in June 2016 in Berlin, Germany.

This will be Georgia’s first international agreement with Iceland and Liechtenstein.

All industrial products produced in Georgia will be exported to all four countries without any additional customs fee,” said Georgia’s Deputy Economy Minister Genadi Arveladze.

He added Georgia would also export its agricultural products to the four countries despite the fact they each experienced rich agricultural markets.

Georgia achieved an unprecedented agreement and the key agricultural products exported will also be exported with zero tariffs.” 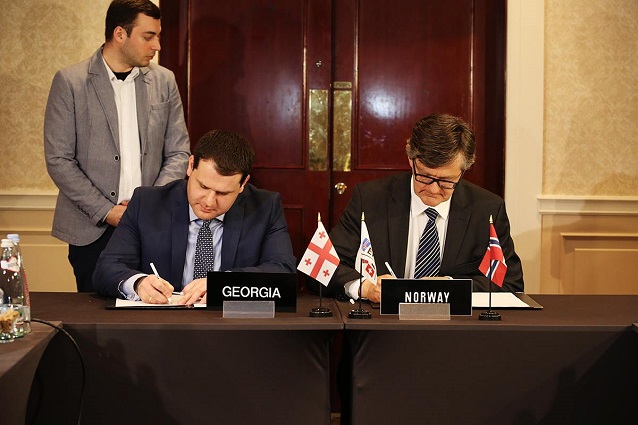 Today Georgia and EFTA agreed to sign a free trade deal in June 2016. Photo by Georgia's Ministry of Economy.

Once the negotiations concluded in Georgia’s capital Tbilisi, head of the EFTA delegation praised the country’s efforts to establish free trade regimes with EFTA member countries.

The negotiations were completed in the shortest time, in just six months. In June at the ministerial meeting of the European Free Trade Association we will sign a free trade deal with Georgia. I hope the agreement will enter into force from the beginning of 2017,” he said.

The decision to establish a free trade deal with Georgia was made by the EFTA Council of Foreign Ministers on November 17, 2014.

The first round of negotiations took place in Georgia in September 2015, while the second round was held in December 2015.

Since the last Trade Policy Review of 2009, Georgia signed a Deep and Comprehensive Free Trade Area (DCFTA) with the EU.

Currently Georgia enjoys free trade with markets that cater to more than 800 million people, including the EU, Commonwealth of Independent States and Turkey.