The Prime Minister of Georgia has dismissed speculations that Georgia’s online provider Caucasus Online intends to sell the strategic fiber optic cable connecting Georgia with Europe to a company with Russian roots, VimpelCom.

Prime Minister Giorgi Kvirikashvili made a statement in response to opposition party Free Democrats’ (FD) leader Irakli Alasania, who several days ago said the strategic fiber optic cable, which lies on the seafloor of the Black Sea, might appear "in the hands of Russia”.

Alasania stressed negotiations were underway regarding the purchase of the cable, which links Georgia with Bulgaria and provides high speed internet to Georgia. He believed the sale of the fiber optic cable would greatly threaten Georgia’s cyber security.

Kvirikashvili agreed negotiations were underway between Caucasus Online and other international telecommunication companies however he said the talks did not focus on the sale of the cable but on another topic entirely.

I have already spoken with the National Regulatory Commission and with VimpelCom representatives within the Davos Economic Forum 2016,” Georgia’s Prime Minister told local media today. 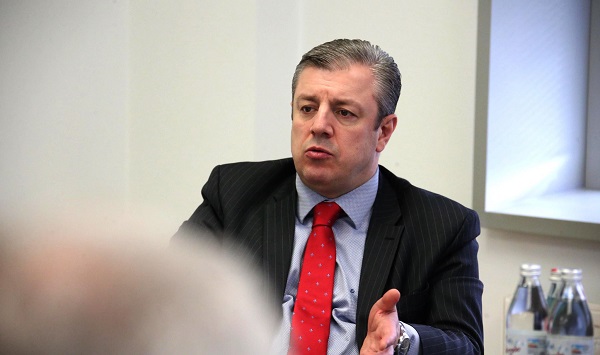 Prime Minister Giorgi Kvirikashvili said the selling of the Black Sea cable and the land infrastructure was  not the subject of negotiations between Caucasus Online and VimpelCom. Photo by the Prime Minister's webpage.

The company – VimpelCom - intends to purchase a retail segment [of Caucasus Online] which is inside the country. I, myself, would be against the selling of the backbone infrastructure [cable].

VimpelCom does not plan to purchase the Black Sea fiber optic infrastructure and any other core infrastructure. It is an ordinal, inter- state business [that] creates no threats [to our cyber security],” underlined the PM.

Caucasus Online, which currently owns the backbone infrastructure of the fiber optic cable, made a statement citing "high public interest” in the issue.

The company confirmed Kvirikashvili’s comments, saying negotiations were underway with several major telecommunication companies regarding the purchase of a retail segment of the company, including VimpelCom and MagtiCom.

Selling of the Black Sea cable and the land infrastructure is not the subject of negotiations. The process is transparent and the list of company's assets, which may be sold, has been sent to the Georgian National Communications Commission as required by the provisions of the Commission. The list does not include the Black Sea cable and therefore it is not part of a commercial deal,” read the Caucasus Online statement.

VimpelCom Ltd. is a global provider of telecommunication services incorporated in Bermuda and headquartered in Amsterdam, the Netherlands. The company’s roots come from Russia, as before it transformed into the global player it was based in Russia.

Now it is the world’s sixth largest mobile network operator with 217 million customers worldwide. Most of the company's revenue comes from Russia (39 percent) and Italy (31 percent).