The Committee of Ministers Deputies of the Council of Europe (CoE) yesterday discussed the 14th Consolidated Report on the Conflict in Georgia, paying particular attention to current difficult human rights situation in two occupied regions of Georgia- Abkhazia and Tskhinvali (South Ossetia).

The report was prepared by the Secretary General of the Council of Europe Thorbjorn Jagland and covered the period of April - September 2016.

Among other issues, the Secretary General paid particular attention to the current difficult human rights situation in Georgia's occupied territories. The Georgian delegation, as well as the delegations of the European Union and the Council of Europe member states expressed their concern about this issue,” Georgia’s Ministry of Foreign Affairs stated.

The Ministry highlighted it was important the Council of Europe continued to monitor the commitments undertaken by Russia and Georgia following the August 2008 war, and that it "kept informing” the international community on ongoing developments in Georgia's occupied regions. 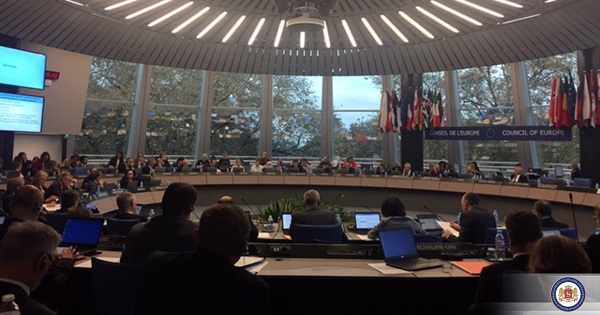 The 14th Consolidated Report on the Conflict in Georgia was prepared by the Secretary General of the Council of Europe. Photo by Foreign Ministry press office.

Only the delegation of the Russian Federation called into question the effectiveness of the Secretary General's consolidated reports,” the Foreign Ministry reported.

The Ministry continued Georgia’s First Deputy Minister of Foreign Affairs David Zalkaliani made a statement during the meeting, which focused on the current situation in Georgia's occupied territories.

Zalkaniani informed the international community over Russia’s permanent violating of human rights in and near the two occupied regions, Russia’s creeping occupation and illegal erecting of so-called border signs and barbed-wire fences.

He also underlined the importance of access of the international monitoring missions to the occupied territories of Georgia.

Georgia’s Foreign Ministry hoped the issue of the conflict in Georgia would remain "high” on the Council of Europe's political agenda.