Georgia’s Prime Minister Giorgi Kvirikashvili and Armenia’s President Serzh Sargsyan have today announced the construction of a new bridge at the Georgia-Armenia border as a symbol of the friendship between the two neighbouring states.

Construction of the new bridge will begin next year, said the two officials after the opening ceremony of the new Bagratashen border checkpoint this afternoon, located at the Georgia-Armenia border.

The ceremony was attended by the Prime Minister of Georgia and the President of Armenia.

Building the new bridge, named Friendship Bridge, at the Sadakhlo-Bagratashen border checkpoint will be completed in less than two years. The bridge will pass over Debed River and ease traffic travelling between the two nations, announced the Georgian and Armenian high officials. 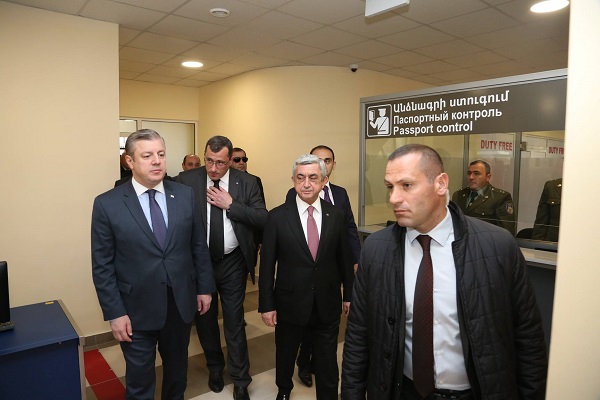 Currently this border crossing area has only a single narrow bridge, built in Soviet times.

Construction expenses will be covered by the European Bank for Reconstruction and Development (EBRD) through the support of the two countries’ governments.

After the border checkpoint opening Georgia's Kvirikashvili and Armenia's Sargsyan sat down for a meeting and discussed prospects of further developing the friendly neighbourly relations and bilateral cooperation in a range of fields.

The discussion also covered the issue of further deepening transport and energy cooperation.

Before the meeting ended Sargsyan congratulated Kvirikashvili on the ruling team's victory in the recent Parliamentary Elections of Georgia.