Janos Herman, Ambassador of the European Union (EU) to Georgia says he is "happy Georgian media is more balanced and informative than it was in 2012”, when the Parliamentary Elections were conducted by the previous state leadership.

Herman stated this today when assessing the media monitoring results, supported by the EU and the United Nations Developmenet Program (UNDP).

The media monitoring examined media performance in Georgia between May 20 and September 25 and covered 46 national and local media outlets; televisions, radio, print and online media.

The upcoming, October 8 Parliamentary Elections in Georgia are the first when the Association Agreement with the EU is fully in force. Elections are always a test and Georgia has a great opportunity to consolidate the democratic gains achieved during previous years,” Herman said.

EU-UNDP media monitoring is a valuable tool to measure and highlight the media's contribution to this process.  I am happy to note that the results show a more balanced and informative media than in 2012,” said the EU high official. 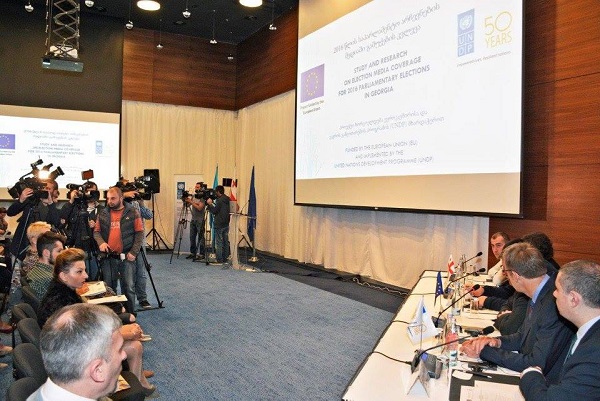 Head of UNDP in Georgia Niels Scott said specific examples and analysis outlined in the media monitoring reports assisted media to perform its duties during the election period, and to pay more attention to cases of unbalanced coverage and hate speech.

One of the most important goals of media monitoring is to stir proactive public discussion and contribute to establishing accountable and responsible relations between the media and society,” Scott said.

In addition, the team of media monitors presented its preliminary findings of the pre-election environment in Georgia, covering the weeks between September 25 and October 5, to reflect growing polarisation in some media segments related to increased political temperature before the elections.

Election media monitoring is being carried out by three Georgian civil society organisations - Georgian Charter of Journalistic Ethics for TV channels, Internews – Georgia for radio, and Civic Development Institute (CDI) for press and online media, with assistance from the European Union and UNDP.

Media monitoring launched in May 2016 and will continue through November 2016. All reports are available online here.