Pope Francis, who is on his first visit to Georgia, has publicly addressed the Georgian people from the Presidential palace in capital Tbilisi with the country’s President Giorgi Margvelashvili.

Take a look at the details of this historical visit via the online map project by Agenda.ge, click Explore.

Standing at the entrance of the President’s residence in Avlabari, Pope Francis said he was honoured to visit Georgia.

Speaking softly in Italian, the Pope talked about Georgia’s long history and of its ties with the Catholic Church; he stressed the Catholic Church shared in the both the joys and concerns of the Georgian people and was committed to contributing to "the well-being and peace of the nation” through active cooperation with authorities and civil society.

I thank God for enabling me to visit this blessed country. Your centuries-old history with your culture, language, tradition and values will grant you a worthy place in European civilization,” said the Pope,

Without specifically mentioning Russia’s occupation of two Georgian regions, the Pope stressed peace was urgent in today’s troubled world and could only be achieved if there was mutual respect for the sovereign rights of every nation. 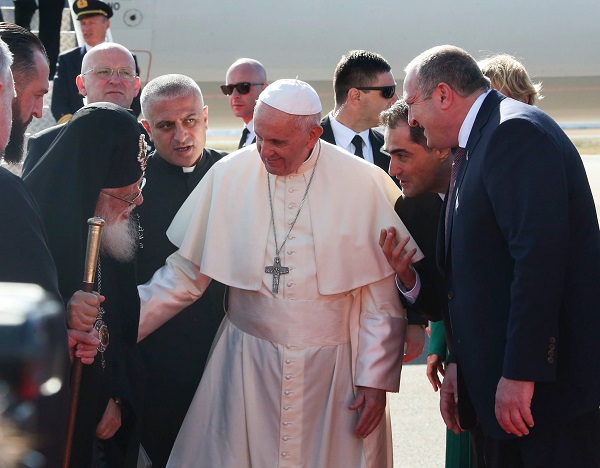 He noted since Georgia regained independence from the Soviet Union 25 years ago, the country had "built and strengthened its democratic institutions” and this was a result of "great sacrifice”.

He insisted peaceful coexistence among all people was the only way forward, and noted Georgia’s geographic location, served as a natural bridge between Europe and Asia that facilitated communication and relations between people.

Watch the video of the meeting at Georgia's Presidential Palace and the join address of the Pope Francis and the President of Georgia Giorgi Margvelashvili below:

Pope Francis voiced his hope that Georgia’s ongoing path of peace and development would continue, and said this was only possible if all sectors of society made a commitment to fostering stability and respect for the rule of law. This would promote growth and greater opportunities for all, he said.

President Giorgi Margvelashvili said this visit – the second high level visit from the Vatican after Pope John Paul II visited Tbilisi in 1999- indicated the "special relations” between Georgia and the Vatican City. 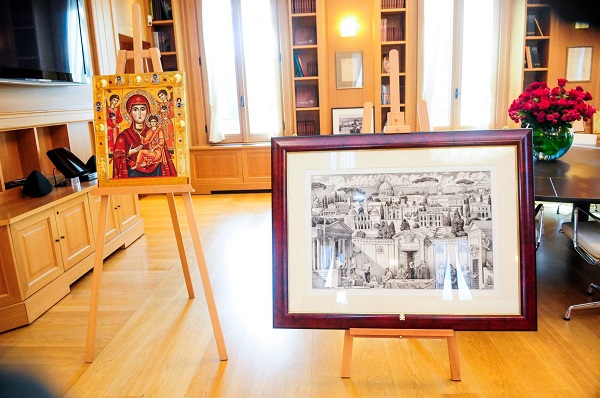 We have always felt strong support from the Vatican since we regained independence. We remember your help in peace and hardship, including the Russian aggression in 2008,” said Margvelashvili.

Your Holiness, I would like to thank you for the assistance and supporting Georgia’s territorial integrity and sovereignty‘, - Giorgi Margvelashvili has said.

Next year Georgia and the Vatican will celebrate 25 years of diplomatic relations but historical ties went much deeper and rooted back to the 12th Century when people from the Vatican first visited Georgia.

In his address Margvelashvili noted the first printed books in Georgian language were published in Italy’s capital Rome in 1629. It was a Georgian-Italian dictionary and a book of the Georgian alphabet, which is one of the world’s 14 oldest alphabets. A Georgian grammar book was also printed thanks to support of Catholic missioners.

Margvelashvili stressed Georgia was steadfast on its path towards Europe and said: "Georgia is not part of Europe, Georgia is one of the creators of Europe”.

In his address alongside Pope Francis, President Margvelashvili highlighted Georgia’s role in fighting for world peace and security, serving shoulder-to-shoulder with its allies.

He then went on to discuss Russia’s occupation of two regions of Georgia. 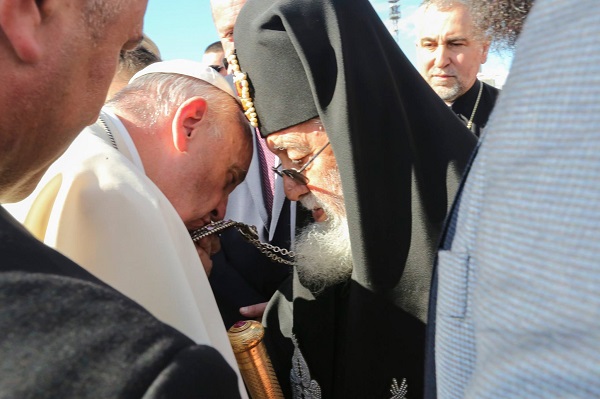 Twenty percent of our territory is occupied and about 15percent of our people are internally displaced. These people were forced from their homes only because they were ethnic Georgians,” he said.

About 40km from here stand barbed wire fence, which prevents families, friends, neighbours and siblings from meeting each other. But despite all this, we are not searching for a confrontation to settle conflicts,” said Georgia’s President.

He referenced the falling of the Berlin Wall and said the world celebrated the wall’s collapse, after which Germany was unified.

About Pope Francis’ visit in Georgia

Pope Francis arrived in Georgia this afternoon accompanied by a 150-person delegation including 70 journalists.

About 350 international media outlets were accredited to broadcast the Pope’s visit in Georgia.

The Pope will spend the rest of today and tomorrow meeting local high officials and visiting important religious sites before departing for Baku, Azerbaijan early on October 2.

His visit is expected to largely focus on the topics of peace and interreligious dialogue, and is seen as a conclusion of his earlier Caucasus tour where he visited Armenia in June.