Tbilisi is turning into an outdoor library.

Hundreds of places where the public can download free digital books are being established in Georgia’s capital to transform the city into an open-air library for locals and visitors alike.

The City-Library initiative was unveiled at Tbilisi City Hall on Monday. All 300 digital library spots are expected to be established and operational by the end of this year. 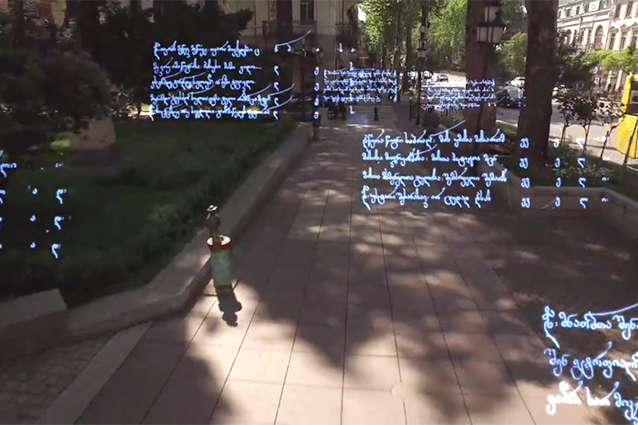 Digital library spots will be established on streets all across the city including Rustaveli Avenue. Screenshot from project video.

Organised collectively by Tbilisi City Hall, Saba Digital Book House and Fund of the President of Georgia, the City-Library project will see digital library spots created on streets named after famous authors as well as next to libraries and in public parks.

Young people have less time for books, so we will try to to bring books to their digital devices. People will be able to download and read literary works in the streets, in the Metro, outside museums and elsewhere during their daily breaks," Amaglobeli told local reporters.

Each digital library location will be identifiable by a booth where users can download books using special QR codes. These books can be opened and read on a mobile device using the Saba Reader mobile application, even without an internet connection.

The books will be available to download in text and audio form, meaning people with visual disabilities will also be able to enjoy the service.

The Saba Digital Book House collection featured up to 3,000 digital books including contemporary works and classics from Georgian and foreign authors.

The public have until June 1 to lodge their submissions on how they want the new digital library booths to be designed. Once the contest closes, authorities will announce the design and begin installing the digital library spots on Machabeli St, Tabidze St, Rustaveli Ave and more.

The project will also bring under its umbrella the 2015 initiative for creating digital library corners in Tbilisi Metro, expanding the number of library areas in the underground stations.

The City-Library project is expected to be fully operational by December 2016.