Georgian air travellers are being given an opportunity to fly cheaper to Europe via Istanbul after Pegasus Airlines announced new Kutaisi-Istanbul flights would launch next month.

Pegasus Airlines, a Turkey-based low cost airline, is hoping to boost competition and cut down curent high prices of air travel within the Georgian air market. The price of tickets from Kutaisi to Istanbul will start from €29.99.

From May 19, passengers will be able to use the Kutaisi-Istanbul route three times per week – on Tuesday, Thursday and Saturday. 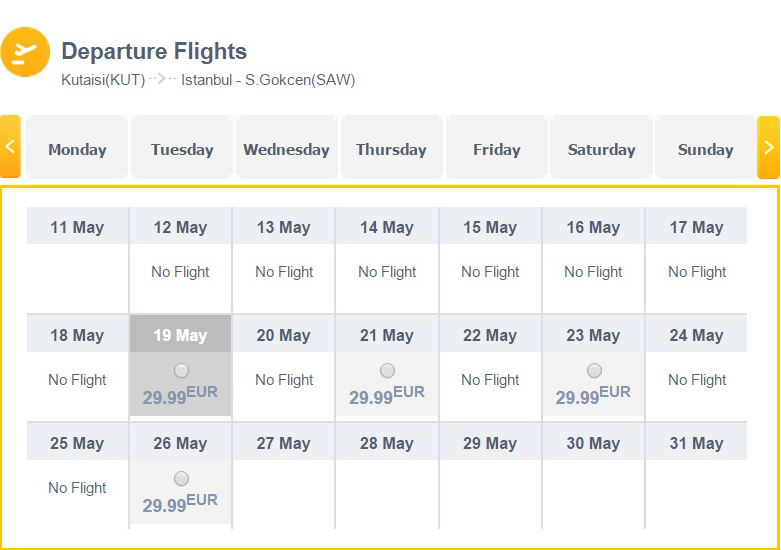 The price of tickets from Kutaisi to Istanbul will start from €29.99.

Pegasus Airlines customers will be able to fly to 100 different directions from Istanbul’s Sabiha Gokcen airport.

Kutaisi International Airport has engaged in talks with a range of international airlines to bring new air carriers, add new routes and increase flights from the regional airport.

Airport officials were negotiating with Spain, Turkey, Germany and other Asian countries regarding new flight services to the Georgian airport. Of them, Pegasus Airlines already agreed to launch flights in Kutaisi. Details regarding the other negotiations have not been announced.

Statistics showed in 2014 about 218,000 passengers were transported on regular or charter flights last year – a 16 percent increase to the previous year at Kutaisi International Airport.