Georgia’s Defence Minister in Washington: “We can be proud of our reforms” (VIDEO)

Georgia’s Minister of Defence Tinatin Khidasheli is in the United States (US) to raise international awareness about the successful reforms carried out in Georgia, the country’s Euro-Atlantic ambitions and Russia’s occupying actions on Georgian soil.

Earlier today the Minister met representatives of leading US non-governmental organisations and research centres before she delivered a speech at the Centre for Strategic and International Studies (CSIS) in Washington. 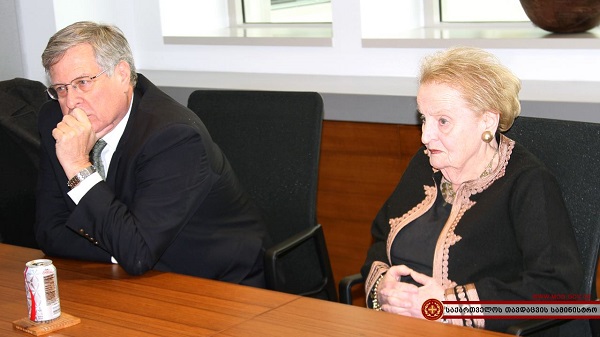 We can be proud of the reforms we are implementing in Georgia and we want as many as possible of our foreign partners to know about them,” Khidasheli said as she stressed the importance of international discussions.

The Minister added official trips she and other Georgian officials embarked on aimed to inform the country’s foreign allies about the developments in Georgia so they had "grounded arguments” to lobby Georgian interests in necessary situations and discussions.

Our aim is to answer all questions the public is interested in and provide them with information that will help them defend Georgia when facing opposing views,” Khidasheli said.

Those who attended the speech at the CSIS said Khidasheli’s speech was "very interesting.”

The CSIS audience stressed Khidasheli provided them with detailed information about Georgia’s relations with other countries of the region, Russia’s activities and intentions in Georgia and about Georgia’s accelerated pace to merge into the Euro-Atlantic space.

Shortly after midday Minister Khidasheli met with representatives of the National Coalition Supporting Eurasian Jewry, former US Secretary of State Madeleine Albright, president of the National Democratic Institute Kenneth Wollack, head of the US Institute of Peace Stephen Hadley and the Institute’s president Nancy Lindborg.

The meetings focused on regional security, Russia's policy in the occupied regions of Georgia and Georgia’s prospects towards membership with the North Atlantic Treaty Organisation (NATO).