Georgia’s Agriculture Ministry will support the victims of a powerful hailstorm that ripped through Georgia’s eastern Kakheti villages and devastated crops and infrastructure.

The storm hit Georgia’s eastern area on August 20 and caused major damage to several villages in Kvareli and Lagodekhi regions as well as in the eastern Pankisi Gorge village Jokolo.

The Agriculture Ministry reported it was very important vineyards and perennial plants survived the natural disaster so pledged to provide affected villages with plant protecting fertiliser.

From tomorrow, August 25, every affected family who own plants on five hectares of land or more will receive the plant protection fertiliser, worth about 65 GEL. 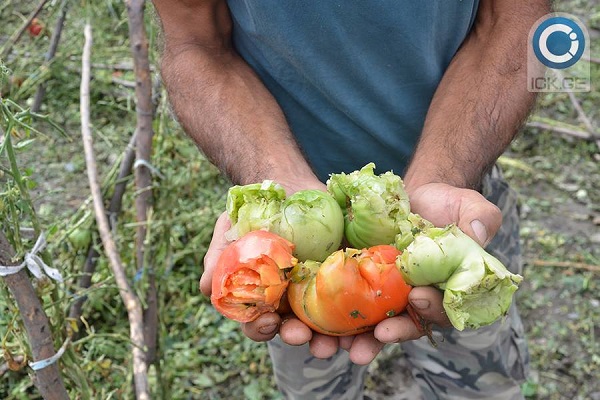 A farmer looks at his devastated harvest. Photo by Information Center of Kakheti.

While the total cost of the damage has not been counted, officials said preliminary estimates could reach several million GEL and the Government would not be able to cover this full cost without support of the Central Government. That was why Prime Minister Irakli Garibashvili came up with the idea to provide assistance to disaster-affected families.

Looking ahead the Ministry of Agriculture will make several amendments to the agriculture insurance project to help disaster-affected families. The changes foresee increasing insurance premium co-financing to 70 percent instead of 60 percent.

In Kvareli village alone about 550 families were affected by last week’s disaster. The hailstorm destroyed about 1,300ha of Saperavi vineyards and 1,000ha of Rkatsiteli grapes. The loss of these two grape varieties was estimated to reach 891,000 GEL.

Meanwhile Georgia’s monitoring and forecast centre forecast heavy rain and hail for some regions of eastern Georgia today and tomorrow. On August 24-25 temperatures are expected to be between 25-27 degrees Celsius in west Georgia and 24-26 degrees in east Georgia.

The weather is expected to remain cloudy and wet until Saturday, August 29, before brightening up again.