Georgia is the leading nation among more than a dozen countries in the Commonwealth of Independent States (CIS) and South-East Europe (SSE) region to embrace a contactless payment service where users can pay for a product in a matter of seconds.

Interest in the Visa payWave service has grown immensely in Georgia over the past six years since it was first introduced and today, Georgia was the leader of 17 countries in the CIS and SEE region, where Visa cards were issued, said a Visa spokesperson.

Nowadays more Georgian customers pay by Visa payWave than in 2009 when the company first entered Georgia. Visa payWave is a contactless payment solution based on EMV chip technology where users hold their card up to a special terminal and money is automatically deducted from their account.

Visa payWay statistics of December 2014 shows supermarkets were the most popular places where people in Georgia used their Visa payWay cards. 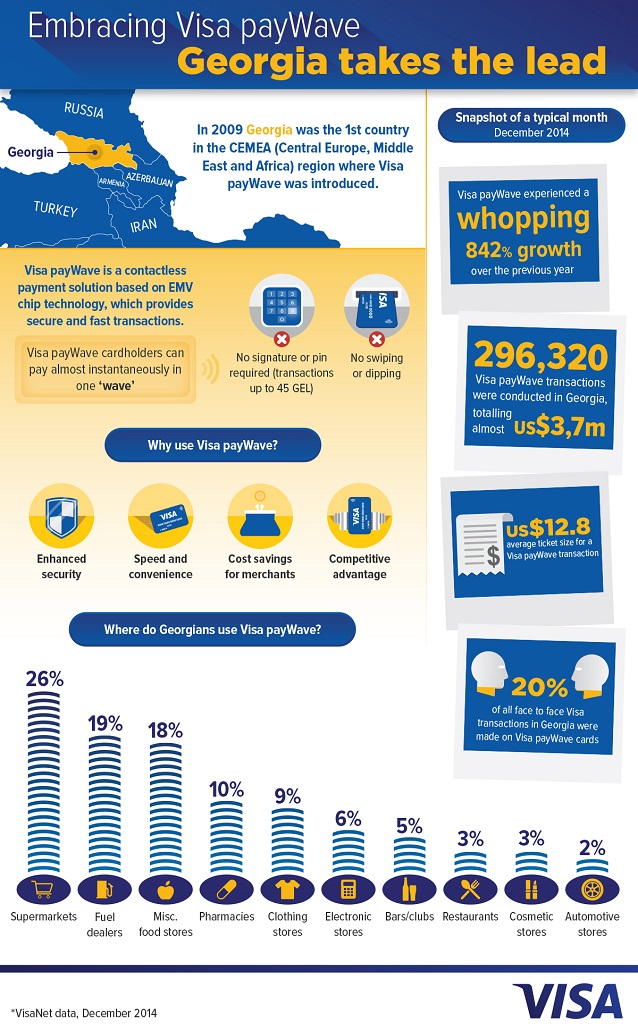 Georgia was the first country in the CEMEA region (Central Europe, Middle East and Africa) where we piloted Visa payWave contactless technology in 2009. From 2013 we have seen a growing interest in Visa contactless payments in the region and in Georgia in particular, both on issuing and acquiring,” Visa Emerging Products and Innovations Director Andrei Shcherbina specifically told Agenda.ge.

Shcherbina elaborated on the results of the Visa payWave scheme in an interview with The FINANCIAL newspaper, where he said: "Georgians appear to be very progressive in terms of adopting payment technologies and banking technologies in general. It can be compared to only a very limited number of countries worldwide. Therefore, we expect for Georgia to soon become one of the leaders in cashless payment systems in the CIS&SEE region.”

The most popular areas where Georgians used their Visa payWave cards in September 2014 were in grocery stores and supermarkets, where 421,480 transactions were carried out and totalled $2,690,086. The next popular place was petrol stations, where 119,505 transactions worth $2,056,751 took place.

Other popular places where Visa payWave cards were used:

The Visa statistics also revealed Polish visitors were more likely to use their Visa payWave cards to purchase items in Georgia than other international guests.

In Georgia TBC Bank and Liberty Bank and the only two banks that issue Visa payWave cards, while banks that acquired the technology are TBC Bank, Liberty Bank, Bank of Georgia, Bank Republic and VTB Bank.

Among the first businesses in Georgia to adopt the Visa payWave service were MacDonald’s, Carrefour, GoodWill, and petrol chains like Gulf and Wissol.