The national currency of Georgia now has its own sign.

From today, Georgian Lari (GEL) will be depicted by a special symbol that derived from the Georgian alphabet character "L”.

The president of Georgian National Bank presented the new symbol at a special ceremony today.

"Introduction of a Lari sign will promote the popularisation of national currency both in Georgia and abroad,” Giorgi Kadagidze said.

"At the same time the popularity of the Lari sign will increase Lari awareness in society and will have a positive effect on the image of Georgian national currency.”

The bank instigated a competition to create a GEL sign in December 2013. The winner, Malkhaz Shvelidze, was awarded 2,000 GEL for his winning entry.

He was chosen as the competition winner by members of a special temporary Commission of the National Bank, which consisted of representatives of the Parliament Finance-Budget Committee, State Council of Heraldry, the National Bank, Ministries of Culture and Education and the Academy of Arts.

Members of the Georgian population were also actively involved in the selection process, Kadagidze said. An internet poll asked participants for comments and recommendations and this helped the Commission select the winning sign.

The National Bank said the selected new symbol obeyed world practice, where signs of other currencies were crossed with one or two parallel lines.

"After several months of work, the project has been successfully completed. Starting from today, Georgian Lari has its own symbol. This is very important for the popularisation of our national currency and for building further trust,” Kadagidze said today.

"The day will come when Georgia becomes a full member of the European Union and we will neglect our currency, but until then, we will do our best so that trust towards national currency is high.”

At the presentation, Kadagidze announced next year was the 20thanniversary of Georgian national currency and many things were being planned to celebrate this occasion. 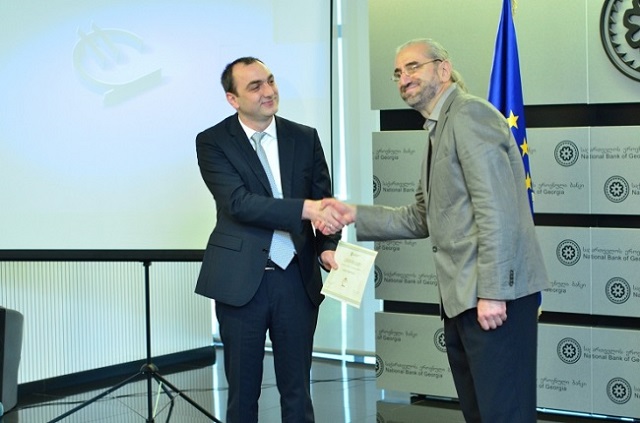