Georgia’s Prime Minister is encouraging business sector representatives to band together to jointly overcome "the big challenges the country is facing” and promised businessmen the industry would not be subject to any form of pressure.

Garibashvili said he had faith the Government could jump-start commerce in a more effective way by coordinating work with businesses and voiced his hope at his regular meeting with about 100 local and international businessmen operating in Georgia.

At today’s meeting, held at the Radisson Blu Iveria Hotel, Garibashvili guaranteed he would not let anyone exert any form of pressure on businesses or interfere in businessmen’s activities. 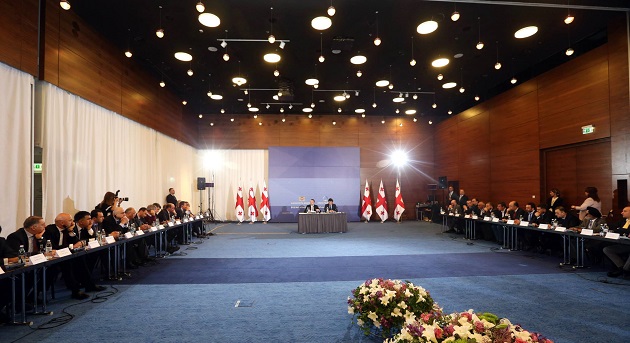 "Every businessman in Georgia is very respectable. After our Government came to power, businesses were freed from pressure and we are doing our utmost to create a completely free and competitive environment in Georgia once and for all,” Garibashvilisaid.

"No businesses should be privileged. I, as the head of the Government, will not let anyone exert any form of pressure on you or interfere in your activities. I want to call on every businessman that if in any way there is a problem, you can appeal to a business ombudsman round-the-clock," he said.

Garibashvili said the goal of the Government was to create "the highest free competitive environment” and not create additional barriers for business development.

He believed the Government had done a lot of work to improve the business environment and create advantageous conditions for private sector development.

He used the Competition Agency as an example of his claim, and noted it was an independent structure established for exercising effective state supervision over a free, fair and competitive market environment.

"Local and international experts are in the process of discussing the legal acts for full-functioning of the Competition Agency,” he noted.

He also noted the importance of developing the Enterprise Development Agency and banks have the opportunity to obtain agriculture lands.

Garibashvili also presented the businessmen with the recently launched Government-funded 46 million GEL ($27 million USD) ‘Produce in Georgia’ project. He said this project would support the creation of new jobs and provide the country with additional income.

The program was first presented on May 19 and will come into force on June 1. The program will initially support any entrepreneur who decides to create a new industrial or agriculture enterprise.

Speaking about challenges of local economy, Garibashvili said problems still remained in tax administration and local producers still had not resolved the problem of defining industrial standards. In addition, natural losses and the tax dispute resolution mechanisms had to be improved, he said.