The story behind remains of a medieval Georgian monastery on Cyprus

Earlier this month, a quiet plot of land near a forest in north-western Cyprus became the centre of attention for state dignitaries and church officials from the country and a visiting Georgian delegation. Their visit to the remains of the medieval Gialia Monastery marked a deal to build a new monastery nearby, for service in Georgian - a decision preserving the heritage of the historical site.

The agreement between the two sides saw the Georgian president Salome Zurabishvili thank Chrysostomos II, the Archbishop of Cyprus, for a "major spiritual present" for the history of Georgian religious service on the island, epitomised by the Gialia Monastery.

While the new church is to be constructed on a 13,000 square metre plot near the remains of the Gialia - reportedly worth one million Euros as it was handed to Georgian institutions by the Cypriot state - it is the ruins of the 10th century monastery that have attracted historians, archaeologists, restoration professionals, anthropologists and other experts to the site for decades. 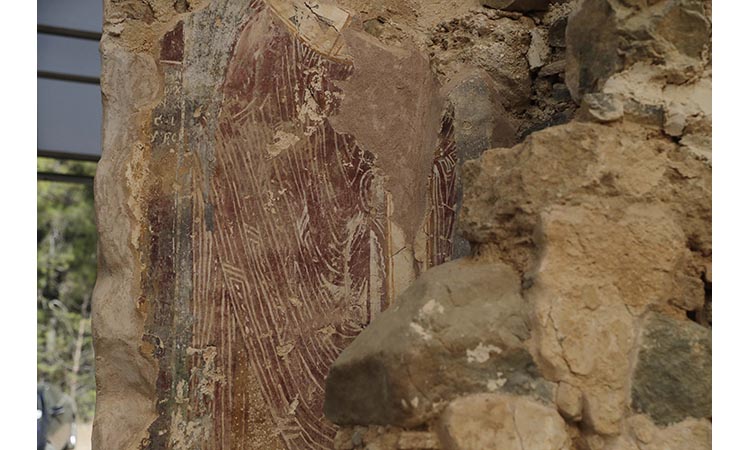 A close-up on a fragment of wall painting on one of the sections of the monastery. The remains were cleaned and conserved by professionals between 2006-2010. Photo via Administration of President of Georgia.

While the remains were first discovered by the United States-based Georgian art historian Vakhtang Jobadze in 1981, teams of professionals from Georgia only arrived in 2006, first to clear the remains of the Gialia Monastery of Virgin Mary - and the St George Church comprised within its bounds - for subsequent work and research, and then working on conservation and studies around the monument.

Their full-scale work on the historical monument was a result of a joint agreement between Georgian and Cypriot state bodies to research and preserve the location, and concluded in 2010.

Studies of artefacts discovered in the remains - which is located near the village of Gialia in the Paphos District of Cyprus - illustrated the story of the monastery, commissioned by the Georgian King David III Kuropalates in the late 10th century, with at least two subsequent renovations over the following three centuries. 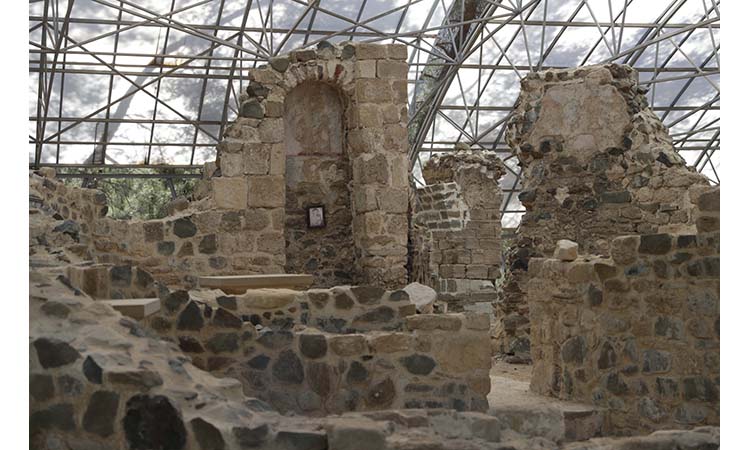 Georgia's State Agency for Religious Issues has described the site as being "particularly loved by locals", who reportedly often visit to pray and spend nights at the remains. Photo via Administration of President of Georgia.

While the monastery turned into a venue of literacy where books were written and translated from Greek to Georgian, those administering the premises also owned a plot of adjacent land. The religious facility and its Georgian staff are mentioned in a number of sources, from a Georgian manuscript now preserved at the Institute of Oriental Studies of St Petersburg, to a 1306 document compiled by the Vatican.

The walls of the northern side of the ruins bear a fresco of the Christ's Descent from the Cross, while the southern end has one for Epiphany. External walls feature a depiction of a cross, while a script on a nearby building containing both mentions and an illustration of St George, one of the principal saints of the Orthodox Christian faith.

Religious service at the monastery was, according to historical sources, ongoing throughout its existence until the late 16th century, when it was mostly destroyed in an Ottoman invasion of Cyprus. A section that remained comparatively intact was still used up until the 1930s, before an earthquake levelled it two decades later. 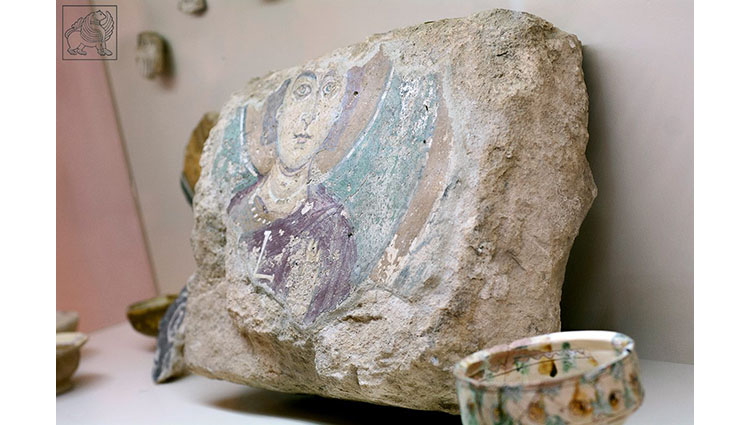 A fragment of wall painting, excavated at the site and exhibited back in Tbilisi in 2015. Photo: Gela Bedianashvili/Ministry of Culture, Sport and Youth of Georgia.

Originating from the Ottoman invasion, a local legend has told of an unlikely escape of a monk from the monastery during its 1571 takeover by the attacking forces. With six of the seven priests serving at the church tortured and killed by the invaders, the seventh reportedly escaped to take a leap from the edge of a cliff, only to land unscathed.

Shocked with the sight, the invading Ottoman soldiers retreated from the site, while the monk built a small cabin where he spent the rest of his life. The spot of his life-saving wonder is referred to by the locals as The Monk's Leap.

On the contemporary end of the story of the monastery, the deal on handing over a land plot to Georgia - and thus marking the Georgian heritage on the island - was formally signed in 2018, with archpriest Giorgi Zviadadze crediting the "great love and respect for our country, our people and our Patriarch" from the Archbishop of Cyprus for the decision.

Following the research and rehabilitation works on the monument - financed by Cartu Fund - the site has already been added to the local tourist map, while ceramics, wall painting fragments and coins from archaeological digs were exhibited back at Tbilisi's TBC Gallery in 2015.