Spring is in the air: Novruz in Tbilisi

If you want to brighten up your day and escape the daily rush of the busy city, pay a visit to an Azerbaijani community in early spring.

This is a time when neighbours offer small gifts to each other and is a place where you are guaranteed to hear only nice things spoken.

On March 20, 21 and 22, when Azerbaijanis celebrate Novruz, youngsters have a fortune telling tradition. Azerbaijani girls and boys sneak to their neighbours’ homes to stand by the door and overhear their conversations. If the first words they hear are positive, they believe their wishes will come true. So everyone tries to discuss only positive topics during these days in an attempt to bring happiness to those possibly standing behind the door listening to the conversation. 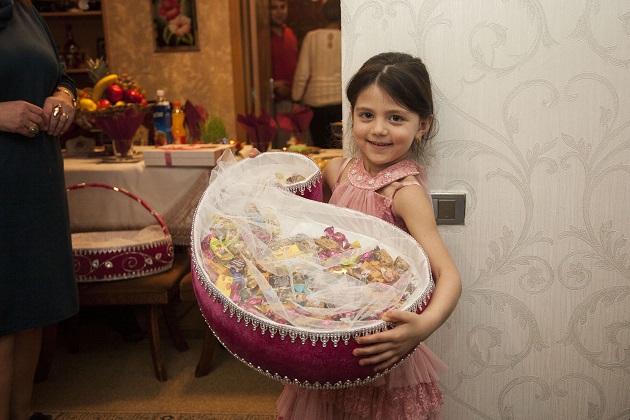 The holiday, which was inscribed on the UNESCO List of Intangible Cultural Heritage of Humanity in 2009, is annually celebrated by Georgian Azerbaijanis too. 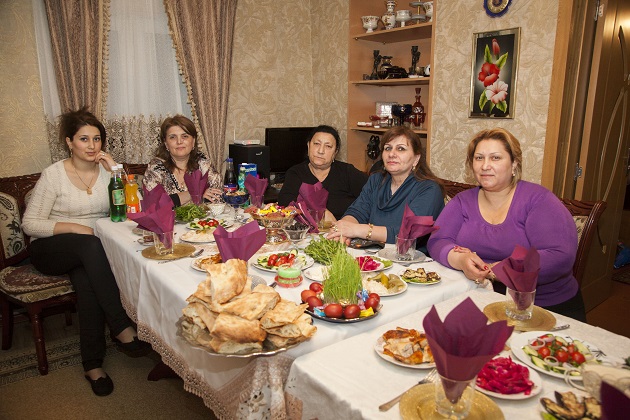 Azerbaijanis are one of the largest ethnic minority groups in Georgia. Latest statistics reveal there are about 285 000 Azerbaijani people living in the country, which make up nearly seven percent of the whole population.

Most of the Georgian Azerbaijanis live in rural areas like the Kvemo Kartli, Kakheti, Shida Kartli and Mtskheta-Mtianeti regions. In addition, there is also a large historical Azerbaijani community in the capital city of Tbilisi.

Tengiz Akhmedov, just like his father, grandfather and dozens of generations before him, was born and raised in Tbilisi. He is Azerbaijani national although he assumes his ancestors must have moved to Georgia around the 16th Century. 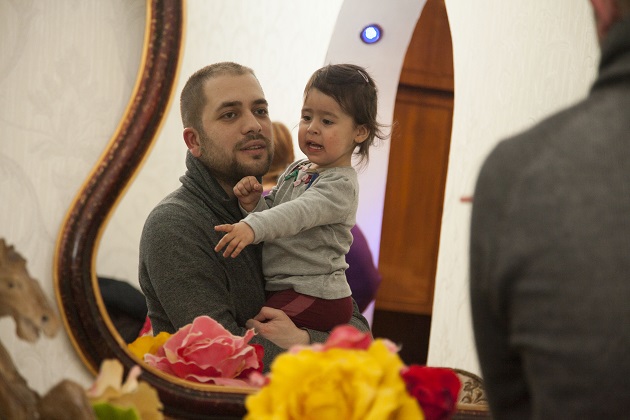 Tengiz Akhmedov and his daughter, Liza. Photo by N. Alavidze

"We feel comfortable the way we are now so we do not even want to go deeper and explore our roots,” Ahkmedov said, while waiting for his ten family members to gather around the Novruz dinner table.

Pakhlava, Shekerbura and Shorgoghal are an integral part of the Novruz feast. Pakhlava and Shekerbura are traditional sweet pastries filled with hazelnuts and walnuts, while Shorgoghal is a non-sweet Azerbaijani pastry prepared for the spring holiday. 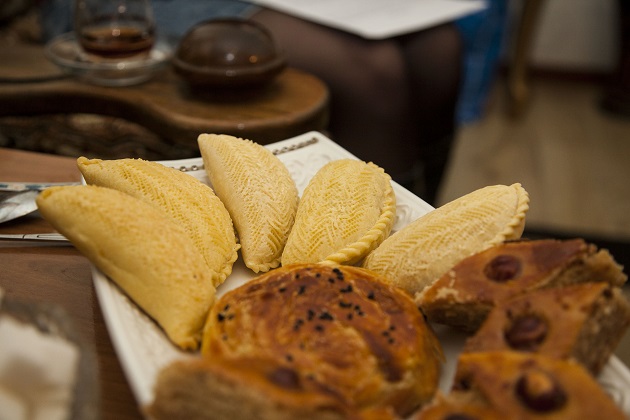 Traditionally, the round, yellow Shorgoghal represents the sun and the crescent-shaped Shekerbura represents the moon. A Shorgoghal is a multilayered bun with a savory, aromatic filling, which is usually enjoyed with sweetened hot tea.

All three of these are presented on the Akhmedov’s table today. There is a traditional Pilaf, sweetened rice with kishmish (raisins) and dried fruit too. 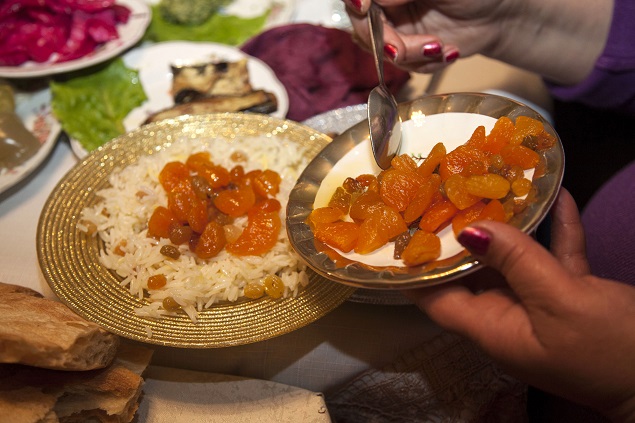 Usually, preparations for Novruz begin a month prior to the festival where each of the prior four weeks is devoted to one of the four elements. Each Wednesday in the previous month, people celebrate the day of water, fire, earth and wind.

In preparation for the turning of the year, Azerbaijanis clean their house, plant trees, make new dresses, paint eggs, cook national pastries and other great varieties of national cuisine for the spring celebration.

This evening, the Akhmedov’s are hosting special guests – their relatives from Baku, Azerbaijan. The whole family and the guests gather around the holiday table laid with various dishes to make the New Year rich and prosperous.

The tables are decorated festively with Khoncha - a big silver or copper tray with Samani - sprouted seeds that symbolize the beginning of new life - placed in the centre and candles and dyed eggs by the number of family members sitting around it.

Getting drunk is something forbidden by Islam. So no one drinks too much tonight but a glass of Georgian wine is still served. 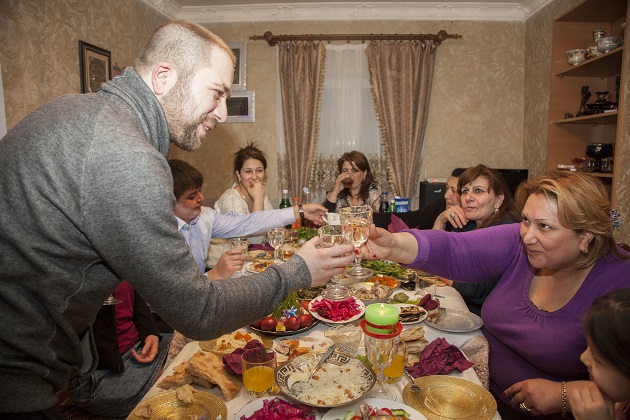 Tengiz Akhmedov and his Aunt, who has arrived from Baku, Azerbaijan, are enjoying Georgian wine; Photo by N. Alavidze

"We are not fully assimilated and this is obvious but we have such a level of integration with Georgians sometimes it is difficult to see a difference,” Akhmedov said.

However, the same cannot apply to the Georgian Azerbaijanis living in rural areas. In some locations of southern Georgia, where Azerbaijani nationals living compactly, Georgians are in the minority.

"So Georgians speak better Azerbaijani there rather than Azerbaijanis speak Georgian,” said Akhmedov, who works for the Civic Integration Foundation and has close ties with Georgia’s Azerbaijani-populated areas.

On the last Wednesday prior to Novruz, in accordance with old traditions, children slip over to their neighbours' homes and apartments, knock at their doors and leave their caps or little baskets on the doorsteps before running off and hiding nearby while waiting for candies, pastries and nuts. No caps and baskets are returned empty. 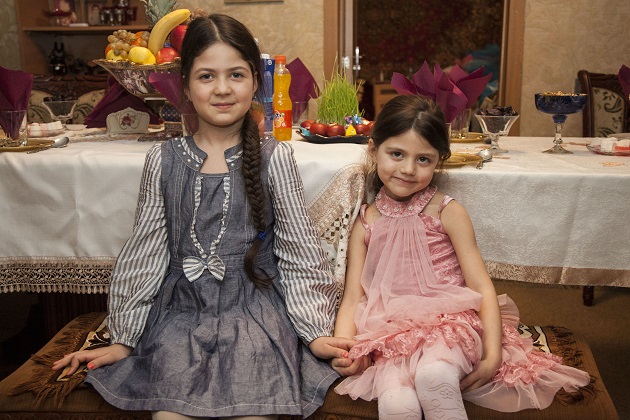 Youngest members of Akhmedov's family dressed up for Novruz. Photo by N. Alavidze

Another Novruz tradition involves dancing around a bonfire in a yard. Unfortunately no fire was lit at the Akhmedov’s tonight because of the windy weather in Tbilisi. 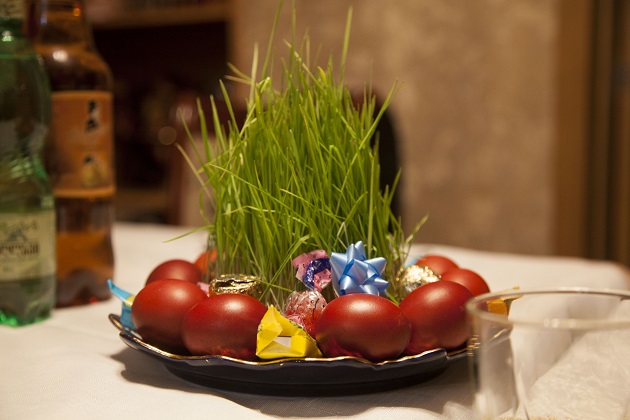