The State Audit Office of Georgia on Tuesday said it would investigate a claim by a member of the United National Movement opposition party who said the party’s incumbent Chair Nika Melia had received a car as a gift from David Kezerashvili, the wanted former UNM Defence Minister and current owner of a commercial TV channel.

The agency said its Department for Monitoring of Political Finances would verify the legality of the alleged donation by the official of the former UNM Government, who was sentenced to 10 years in prison in absentia in 2021 for embezzlement of Defence Ministry funds while in office between 2006 and 2008.

The inquiry follows controversy and intra-party feud in the UNM between different camps and ahead of elections for selecting its new Chair.

Party member Levan Bezhashvili on Sunday said Melia had enjoyed a “close and friendly cooperation” with Kezerashvili over the past several years. The comment came in contrast to claims by Melia and his allies that Kezerashvili and the former UNM Interior Minister Vano Merabishvili had recently begun “interfering” in the party’s internal matters “from the backstage”.

In his interview for the Formula TV channel - owned by Kezerashvili - Bezhashvili claimed the former ministers had supported Melia “in several elections”, with Kezerashvili also gifting him “an expensive car”. 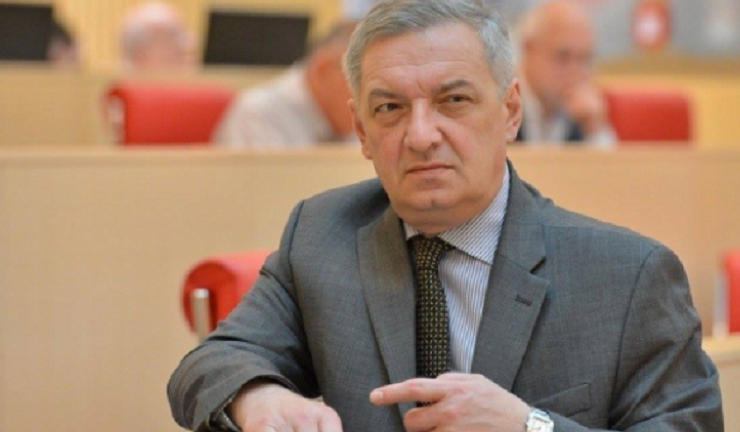 Gia Volski from the ruling Georgian Dream party said the ongoing developments in the UNM had "once again demonstrated" the party "has nothing to do with democracy". Photo: Parliament press office.

Responding to the claims in a social media post on Monday, Melia, who had accused Kezerashvili and Merabishvili of taking actions to remove him from party leadership, confirmed the presence of the car in the party garage, but stressed Kezerashvili had  decided “on his accord” to send the vehicle “to party leadership” several years ago.

Melia - in charge of the largest opposition group in the county since December 2020  - said he had attempted “several times” in June 2022 to return the vehicle to its owner, following Kezerashvili’s “open intentions to interfere in UNM’s activities”.

In comments from the ruling Georgian Dream party, Gia Volski, the Parliament Vice Speaker, said the car could have been obtained with the money Kezerashvili had “stolen from the Georgian army” while in office.

The MP called for the legality of the donation to be verified, adding the ongoing tensions in the opposition group had “once again revealed the UNM as a radical and ruthless” political force.