The latest data on real Gross Domestic Product (GDP) show that the Georgian economy increased by 12% in November 2021 year-on-year and by 10.7% in January-November 2021, the National Statistics Office of Georgia (Geostat) states.

Finance Minister Lasha Khutsishvili says that ‘by the end of 2022, the volume of our economy will approach 65 billion GEL, and GDP per capita will be more than 5,600 USD.’

The World Bank report goes on to say that the Georgian economy is estimated to be the second-fastest growing economy in the region of Europe and Central Asia (ECA) in 2021, with an estimated growth of 10.5%, ‘​​reflecting a strong rebound in domestic demand.’ 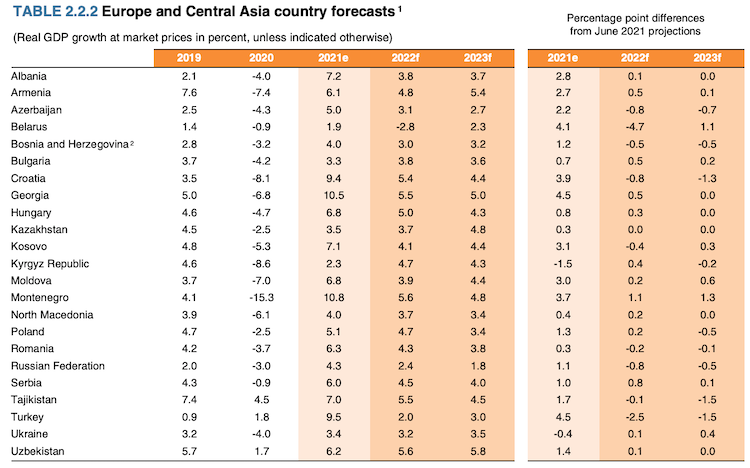 Georgia’s economy is projected to ease toward its potential growth rate in 2022 and 2023 amid tighter fiscal policy,” the report reads.

The World Bank states that ‘the forecast is predicated on limited pandemic-related disruptions supported by progress with vaccinations, and improving consumer and business confidence.’

The World Bank also says that growth in Russia - the region’s largest economy - is projected to decrease to 2.4% in 2022 and to further to 1.8% in 2023, ‘as industrial commodity prices edge down.’

DISCLAIMER: This publication/article/reporting (specify) is made possible by the support of the American people through the United States Agency for International Development (USAID), within MediaTOR project, implemented by ISET Policy Institute and Internews Georgia under the USAID Economic Governance Program’s grant activity. The content of this publication/article/reporting (specify) do not necessarily reflect the views of USAID or the United States Government.