The Georgian economy grew by 10 percent in the first 10 months of 2022 with the real gross domestic product growth showing an 8.3 percent increase over the previous year, the latest data from the national statistics office shows.

Areas including construction, transport and warehousing, financial and insurance activities and mining industry made a “significant contribution” to the growth, the body said.

In other data, a downward trend was observed in the processing industry and activities related to real estate, Geostat also added. 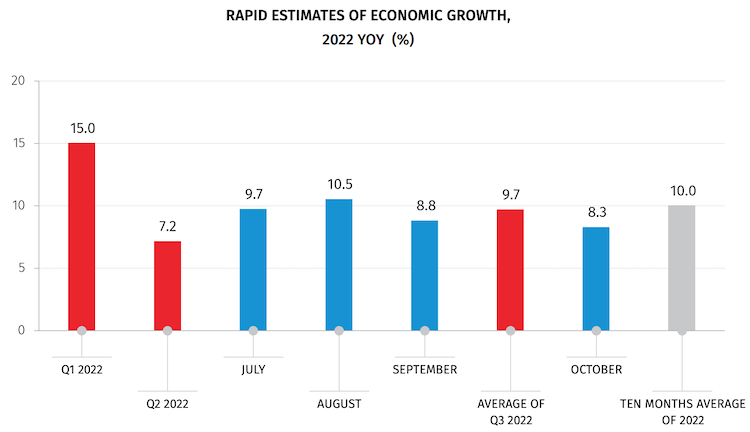 The European Bank for Reconstruction and Development recently raised its economic growth forecast for Georgia, announcing it was expecting the domestic economy to grow eight percent this year, "significantly higher” than the previously predicted three percent growth.

In addition, the Asian Development Bank projects the Georgian economy to grow seven percent in 2022, "driven by higher export and tourism revenue, a large inflow of money transfers, and strong private consumption".

Georgian prime minister Irakli Garibashvili on Monday highlighted the country’s “double-digit” economic growth for two consecutive years, stressing the outcome was the result of the “sound economic policy” of his government. He noted that the economic growth projection will be adjusted to 10 percent instead of the originally projected 8.5 percent this year.