Georgia’s imprisoned former President Milkheil Saakashvili is a “historic criminal”, not a historic figure, ruling Georgian Dream party MP Rati Ionatamishvili said on Thursday in response to Mykhailo Podolyak, an adviser to the Head of the Ukrainian President's Office, who had commended Saakashvili as a “historic figure” whose arrest in Tbilisi last year was “unjustified”.

In comments, Ionatamishvili said Saakashvili’s role as a “creator of a criminal regime” - in reference to the United National Movement Government that preceded Georgian Dream - had been “confirmed” not only by domestic courts but also the European Court of Human Rights.

The MP said the ECHR’s rulings on several high-profile cases [including the 2006 murder of Sandro Girgvliani under the UNM Govermmet] “openly described Saakashvili as the creator of a criminal regime”, adding Podolyak’s “supportive statements” towards the former Georgian President were “against principles of justice and democracy”. 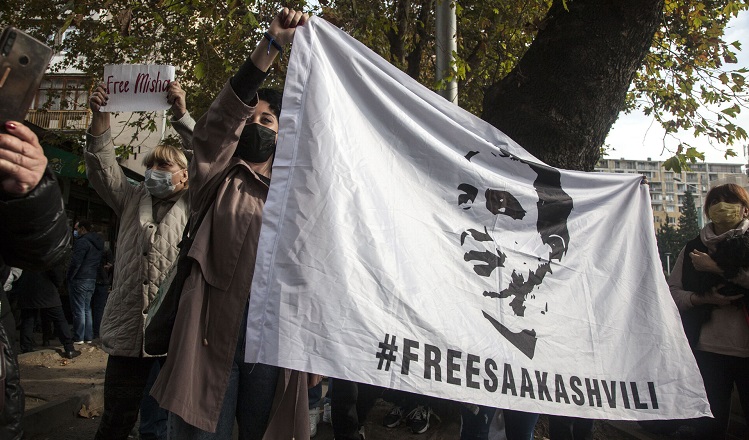 Saakashvili was arrested in Tbilisi on October 1, 2021, after eight years in political exile. Photo: Nino Alavidze/Agenda.ge.

In his interview with the opposition-minded Mtavari Arkhi channel in Georgia on Wednesday, Podolyak expressed support for Saakashvili, who currently holds Ukrainian citizenship and chaired the Executive Committee of the Ukrainian National Reforms Council before being arrested in Tbilisi in October 2021, and called for his transfer into third country.

Along with Saakashvili’s case, the Ukrainian official slammed the Georgian Dream Government for its “negative tone” to Ukrainian authorities on the backdrop of Russia’s invasion of Ukraine.

In their response, Georgian ruling party MPs noted Podolyak’s rhetoric amounted to not just criticising the Georgian authorities, but also “the most serious allegations” that the Georgian Government was facilitating use of Georgia's territory by Russian individuals and entities for bypassing Western sanctions imposed on Russia due to the invasion.

The claims by Ukrainian officials have not been accompanied by evidence of the violations, whereas their Georgian counterparts have rejected the claims in strong terms.