Georgian institutions and the public are celebrating Mother Language Day today, commemorating mass protests that forced Soviet authorities in 1978 to abandon plans to strip Georgian of the status of the official state language of the country.

The celebrations have included messages from officials marking the date, and occasions including a graduation of ambassadors of the Georgian language who will teach it to ethnic minority communities across the country.

Vato Makharoblishvili, the Head of the Georgian mission to the European Union, called the celebration an “essential part of national identity, history and national self-consciousness.”

The Embassy of Georgia to Hungary also posted a message on Twitter for the anniversary that said the day marked Georgia’s “courageous victory over the Soviet repressive machine.”

#OnThisDay 14 April is a Mother #Language Day in #Georgia????????
It marks????????'s courageous victory over the Soviet repressive machine in maintaining #Georgian as the official language of the country.
DedaEna(Mother Language)Monument in Tbilisi by Elguja Amashukeli&Nodar Mgaloblishvili pic.twitter.com/2o7cVUGSaH

The messages mark the 1978 date, when around 100,000 citizens marched from the central Tbilisi State University block to the building of the Supreme Council in the capital, in protest of the plans revealed by the Government to remove the official state language status from the language. 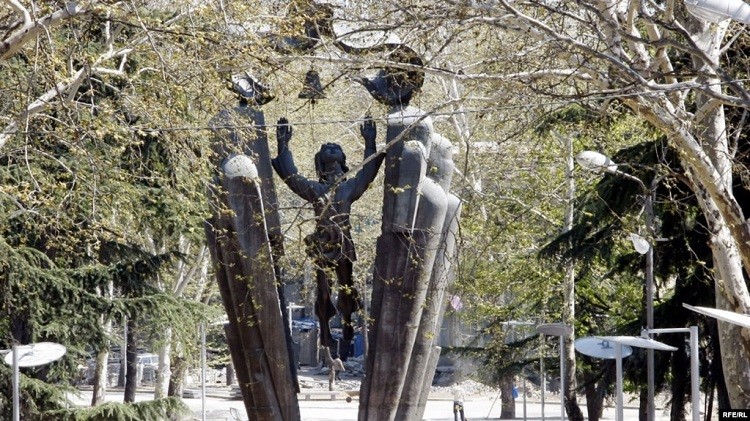 The Soviet regime was forced to concede to the demands of the protesters due to the scale of the backlash, with a special monument later erected in a Tbilisi recreational spot now known as Dedaena Park (for ‘mother tongue’ in Georgian) to honour the events of the day. Photo: RFE/RL

Georgia has its own unique writing system, comprised of 33 letters and in line with the Georgian phonetic system. Consisting of three writing types used throughout history, the Georgian alphabet has been granted the national status of Cultural Heritage in Georgia, and was added to the UNESCO list of Intangible Cultural Heritage of Humanity in 2016.