Georgia’s former president Mikheil Saakashvili is attending a trial hearing today in Tbilisi City Court which concerns the embezzlement of 8,837,461 GEL in state funds for personal purposes while in office.

The Prosecutor’s Office says that according to the agreement between Saakashvili and former head of Special State Protection Service of Georgia, Teimuraz Janashia, between 2009 and 2013, the state funds were used for expensive clothes for Saakashvili, massage and other aesthetic procedures, as well as for other individuals connected with the former president.

The Prosecutor’s Office says that the money was skimmed from the budget of the Special Protection Service of Georgia in a secretive manner.

Nika Gvaramia, lawyer of @SaakashviliM, while wearing his infamous jacket, spoke about how the entire case is a historic disgrace
More: https://t.co/CRplpXhJyT pic.twitter.com/LMvRrubK72

Saakashvili, who was allowed to attend the second trial hearing since his arrest in Tbilisi on October 1, says that the case is ‘particularly shameful,’ noting that all seven charges against him are ‘politically motivated.’

However, judge Badri Kochlamazashvili did not fulfil the demand.

Saakashvili says that he is attending trials in his own cases to ‘address the public,’ and not because he is waiting for fair judgements.

He claims that the Georgian court ‘is fulfilling the government’s demands.’ 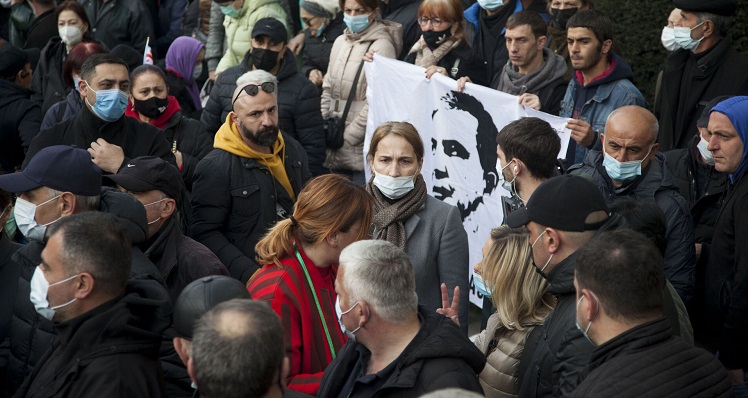 Ruling party MP Gia Volski says that embezzlement of state funds is a crime and everyone must be equal before the law.

A former French president was convicted for spending 300,000 euros from the state budget on his wife,” Volski said.

Saakashvili called off his 50-day hunger strike on November 19 after he accepted his transfer to Gori military hospital for treatment.

Following this, the Georgian Justice Ministry said the former president could be brought to the court to attend his own trials.

Saakashvili, who is now a citizen of Ukraine and holds an official post there, says that he returned after eight years in political exile ‘to remove the Georgian Dream government from power.’

He was convicted in absentia in Georgia in 2018 for abuse of power and was sentenced to six years in prison.

Saakashvili has also been charged with five other offences, including illegal seizure of property, embezzlement, abuse of power, illegally crossing the border and illegal rally dispersal.