Georgia observes the 49th birthday of the country’s national hero, Zaza Damenia, who saved the lives of fellow soldiers at the cost of his own in August 2004 during hostilities in Georgia’s Russian-occupied Tskhinvali region (South Ossetia).

Zaza Damenia, who served in the Commando Battalion, was sent to the conflict zone to protect Georgian villages.

Hostilities in the Tskhinvali region claimed the lives of 16 Georgian warriors. 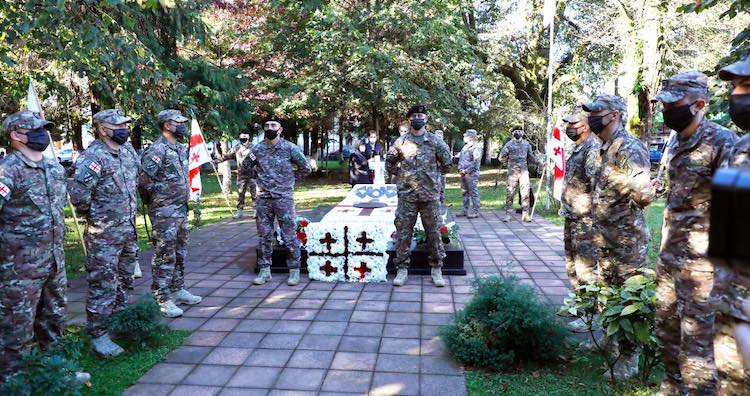 Representatives of Georgian Defence Forces once again honoured the memory of Zaza Damenia. They laid a wreath at the hero's grave in Georgia's western Ozurgeti municipality and recalled the history of his heroism. Photo: Georgian Defence Ministry.

Damenia, despite injuries received two days earlier, remained on the battlefield and covered a grenade which fell into his foxhole with his own body, saving his fellow soldiers from death on August 16, 2004.

He was given the rank of National Hero posthumously by former Georgian President Mikheil Saakashvili on August 24, 2004, for exceptional bravery in the fight for the protection and unity of the homeland.

Zaza Damenia had been serving in the Reconnaissance Battalion of the Georgian Armed Forces since 1992.

He also fought in Georgia's Russian-occupied region Abkhazia during the 1992-1993 armed conflicts.