The estimated real gross domestic product (GDP) growth rate in June 2021 equaled 18.7 per cent year-on-year and 12.7 per cent in January-June of 2021 year-on-year, the preliminary data of the National Statistics Office of Georgia (Geostat) show.

The following industries of the economy posted growth in June 2021 compared to the same period of the previous year: 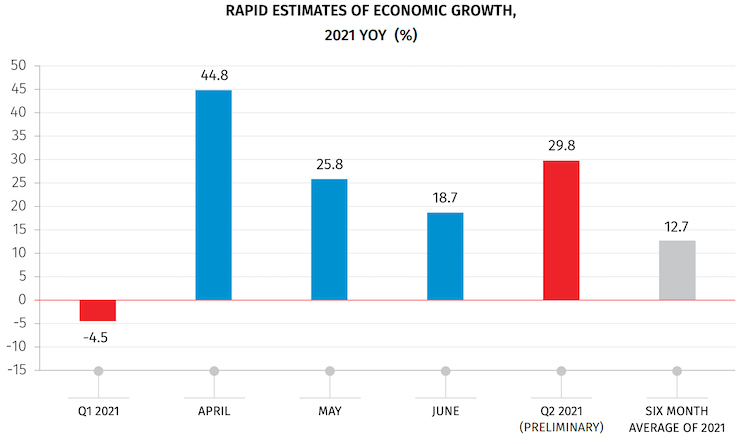 Georgian Economy Minister Natia Turnava stated earlier today that there is economic growth in 'almost every industry,' noting that she expects the current year to end 'with at least 7.7 per cent of economic growth, as well as employment growth.’

Geostat reported that a decline was registered in mining and quarrying.

Based on the Geostat report, in January-June 2021, the export of goods increased by 25.2 per cent, while imports increased by 18.9 per cent.

The Georgian economy is expected to grow 3.5 per cent in 2021, rebounding with the gradual lifting of the Covid-19 pandemic restrictions and revival of domestic demand, the Asian Development Bank (ADB)’s Outlook 2021 report reads.

The ‘Europe and Central Asia Economic Update’ published by the World Bank reads that the Georgian economy is unlikely to recover to pre-Covid levels until late 2022.