Former Interior and Prime Minister of Georgia, one of the most influential figures of the United National Movement (UNM) government, Vano Merabishvili left prison earlier today after serving almost seven years, stating that he is returning to politics and ‘guarantees’ the end of the current Georgian Dream leadership.

Standing at Matrosovi prison Merabishvili told the media that the opposition is united around key demands. However, his close friends are now in different opposition parties.

I will meet all of them and make a decision [which party to join] afterwards,” Merabishvili said.

He stated that by the end of the year the Georgian Dream government 'will be overthrown' and Matrosovi prison gate ‘will open wide for political prisoners.’

Merabishvili said that he may face further charges. However, ‘this will not stop me.’ 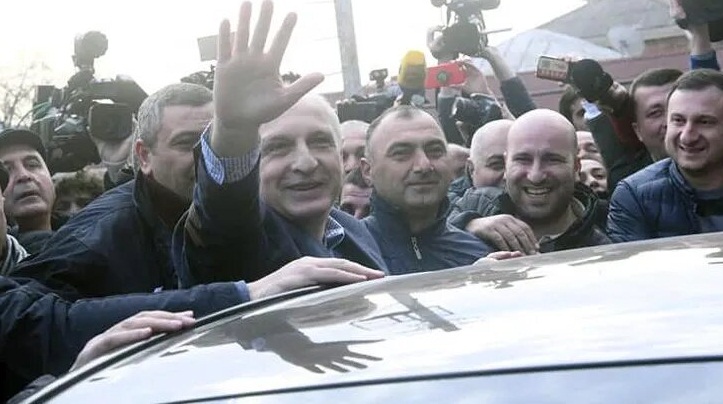 The opposition says that Merabishvili was a political prisoner which was not confirmed by the European Court of Human Rights. Photo: IPN.

Merabishvili was detained in May 2013, a year after the Georgian Dream coalition defeated the United National Movement in parliamentary elections, and has been serving a sentence for several convictions, including for the brutal dispersal of an opposition rally on May 26, 2011, the murder case of Sandro Girgvliani and the attacking of the opposition MP Valeri Gelashvili.

Merabishvili may face further charges for the raid on Imedi TV in 2007 and the dispersal of another rally on November 7, 2007.

The UNM says Merabishvili is a political prisoner, which was not confirmed by the European Court of Human Rights.