The purpose of the annual survey is to better understand the opinion and the level of awareness that citizens of Georgia have about the EU and EU cooperation with their country.

Nearly all have heard of the EU (96%) and almost all feel either positive (49%) or neutral (40%) about it, with no significant change compared to the previous survey results”, reads the report.

Peace, security and stability appears to be the most important values at a personal level for 61 per cent of the survey participants. 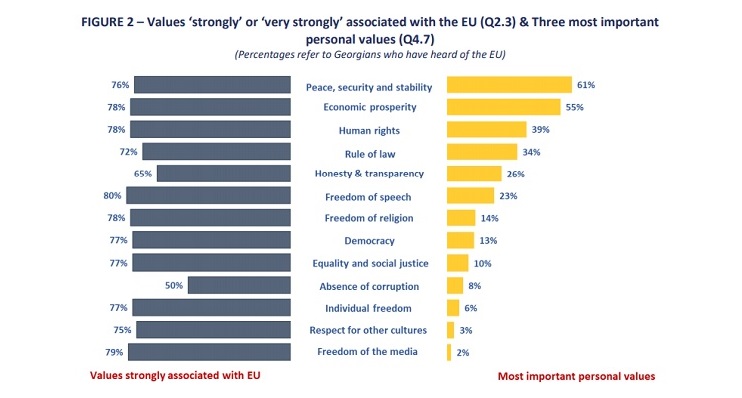 Between 8% and 23% of citizens could not provide a definite opinion on the issue. Photo: Infographic from the survey.

Economic prosperity and human rights are strongly or very strongly  associated with the EU by over three quarters of Georgians.

Absence of corruption (50%) and transparency (65%) appears to be the least EU-associated values for the Georgian citizens.

In 2019, 60 per cent of Georgians aware of the EU’s financial support knew about specific EU-funded programmes – with a huge increase from 2017 (up 19%). This figure has remained stable in 2020 (61%), confirming the  widespread knowledge on assistance  allocated by the EU among  the population”, reads the survey.

Around 70% of citizens know that the EU provides financial support to Georgia – it was 74% in 2019 – around 70% of them recognise its effectiveness (up 7%). Photo: Infographic from the survey.

The most well-known EU-financed programmes relate to the fields of education, agriculture and rural development, infrastructure development and economic reforms.

The survey took place in Georgia in February and March of 2020, before the COVID-19 crisis.