Facebook has removed over 500 pages, more than 100 accounts as well as groups and Instagram profiles engaged in "coordinated inauthentic behaviour" via sharing misinformation about Georgia's domestic politics and the COVID-19 outbreak.

In the latest round of removals and bans by the social network, accounts and pages run by two organisations based in Georgia were affected, the latest CIB report from the company said.

In total the network banned 511 pages, 101 accounts, 122 groups and 56 Instagram accounts run by the firm and most recently engaged in "harmful health misinformation" about COVID-19. 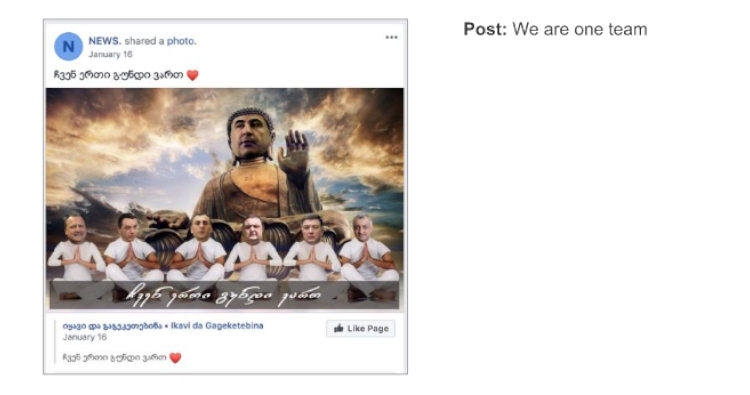 A screenshot of an edited image post placing figures of Georgian political opposition together with former president of the country Mikheil Saakashvili, now sought by the Georgian justice system and residing in Ukraine. Screenshot from Facebook report.

Pages run by the firm posted edited content about the political opposition in Georgia as well as posts positioning government figures in positive light. Some of the pages "posed as independent news outlets", while individuals behind them used false names and stock images to run fake user profiles, Facebook said.

The pages were followed by over 970,000 accounts, with over 1,500,000 accounts following the groups and the Instagram accounts having around 26.000 followers. The operation also spent about in Facebook ads.

Responding to the news involving the media firm, Mamuka Mdinaradze, member of the political council of the Georgian Dream ruling party and parliament MP, called a press conference in Tbilisi on Wednesday to deny any formal connection or agreement between the government and Kandiashvili.

Mdinaradze told reporters Kandiashvili was publicly known to be a Georgian Dream supporter but had no official connection to the party since around 2014.

The second operation unveiled and removed by Facebook involved 23 accounts, 80 pages, 41 groups and 9 Instagram profiles posting about topics such as the 2018 elections in Georgia and candidates involved.

Also posting criticism of the government, its handling of the COVID-19 pandemic and content aimed at the Georgian Orthodox Church, the pages were traced to "individuals associated with the United National Movement" opposition party, Facebook reported.

With around 785,000 followers for its pages and about 6,300 accounts following its groups, the operation also had 6,400 followers on Instagram. Around was spent on Facebook ads for its content while the pages also organised events on Facebook that involved over 11,000 people. Facebook said many of the pages had been inactive since 2018.

The party also responded to the development on Wednesday, releasing a statement that denied operation of the pages and said the UNM found such methods "unacceptable". It also welcomed the removal of pages by Facebook and accused Georgian Dream of releasing fake information and "stoking hatred" in the country.

The pages run in Georgia were removed by Facebook alongside those operated in Russia, Iran, the United States, Mauritania and Myanmar this month. The full Coordinated Inauthentic Behavior report for April 2020 can be viewed here.