Georgian installation artist Nika Kutateladze is sharing the spotlight with his peers from across Europe in an “ambitious” Paris display Metamorphosis. Art in Europe Now, open in the capital city starting Thursday.

Kutateladze, who has featured in residencies and exhibitions in Georgia and France, was selected in the show organisers said aimed to highlight “the diversity of voices and vitality of exchanges animating the vast European artistic scene.”

It is held by Fondation Cartier, a contemporary art foundation that narrowed a preliminary list of nearly 1,000 artists from European countries down to just 21 for the exhibition.

Referred to as an “ambitious research project”, the ultimate pick of the young talent brings them together from 16 countries.

Curators noted the artists selected by them were drawing on a range of sources for their work and were “inspired by the past” while also displaying “keen attention to issues of the present”.

Born between 1980 and 1994, they came of age after the fall of the Berlin Wall, and together demonstrate the extraordinary dynamism of the continent’s artistic scene,” said the foundation’s release about the roster for the display.

Kutateladze graduated from the Tbilisi State Academy of Arts with a degree in architecture before also completing studies at the city’s Centre of Contemporary Art.

The creative has participated in residency programmes including at La Station in Nice, France and the Yarat Contemporary Art Center in Baku, Azerbaijan. His solo shows include the 2016 Wall, Coarse calico, Parquet and the 2017 Minibus and Playground in My Old Apartment at 20 Mickevich Street. 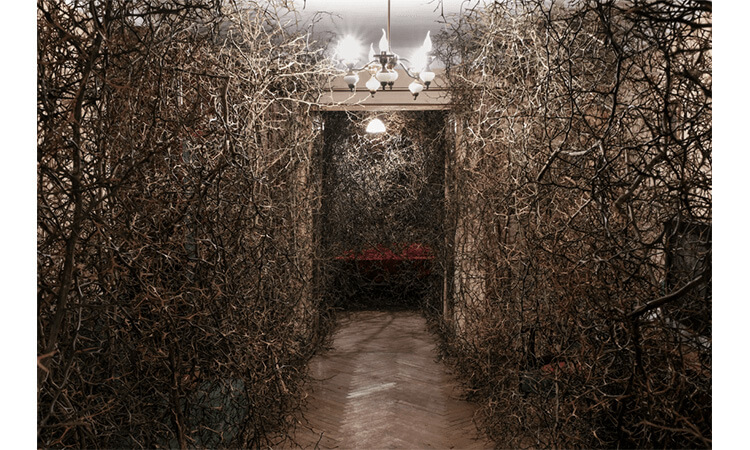 Nika Kutateladze, 'To Protect My House While I’m Away', 2018. Photo: propaganda.network.

Working in installation and land art, his work includes To Protect My House While I’m Away and Watermill on Former Pavlov Street (2018), the latter displayed at the opening of Kunsthalle Tbilisi, a new artistic venue in the Georgian capital.

Kutateladze was also featured in the Project ArtBeat group show Eeny, Meeny, Miny, Moe last year, while in 2016 he was nominated for the Tsinandali Visual Arts Award, a newly established prize for Georgian artists.

While the Paris show features installation by the young Georgian, the exhibition also opened with a panel discussion that involved three other personalities from the creative scene of the country.

Metamorphosis. Art in Europe Now will be open for visitors through June 16.