Georgian PM opens Tbilisi Silk Road Forum: ‘New Silk Road is a priority for us, we’re proud of our role’

Georgian Prime Minister Giorgi Gakharia, who has opened the two-day Tbilisi Silk Road Forum attended by 2,000 delegates from up to 60 countries, has stated that the conception of the New Silk Road, to connect Europe with Asia, and the participation in the initiative is among the top priorities of the Georgian government.

Historically Georgia has played an important role in the development of the Silk Road. In the modern world, when economic integration and globalization is in action, the development of trade and economic relations between countries is of top importance and we are proud to be the part of the Silk Road initiative which serves the goal of close economic, state-to-state cooperation,” Gakharia said.

He said Georgia was one of the first countries which applauded the Chinese Belt and Road initiative (also known as a new Silk Road), to create new trade corridors between Europe and Asia and improve existing ones.

We supported the initiative and signed the cooperation deal back in 2015 which gave a new push to Georgia-Chinese relations and led to the signing of the free trade deal,” Gakharia said.

He stated that the Tbilisi Silk Road Forum is “an important opportunity” and a platform on which the countries involved in the Silk Road initiative, international organisations and the private sector discuss regional economic challenges, searching for ways on how to overcome the challenges and share experience.

I am sure that the Tbilisi Silk Road Forum will play an important role in the implementation of the Silk Road initiative. We believe that the forum will help Georgia carry out its function, to be a connecting bridge between Europe and Asia, more effectively,” Gakharia said. 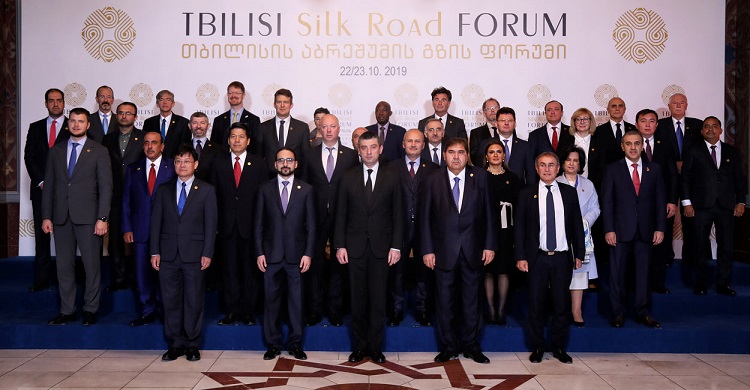 Georgian PM said that the success of previous two Tbilisi Silk Road forums gave a push to the third one being held now in Tbilisi. Photo: government of Georgia press office.

He stated that in the modern world the creation of new transport corridors between Europe and Asia “is not only the opportunity, but also a necessity.”

Gakharia stated that Georgia “has taken huge steps” over the past several years to develop its transport and logistic fields and infrastructure, to refine laws and integrate itself into global transport systems.

Today Georgia is a reliable and trustworthy partner, with free trade deals with the EU and China, offering big opportunities both for local and foreign investors,” Gakharia said.

This is the third Silk Road forum to be held in Tbilisi.