My bilateral programme will comprise meetings with PM @GakhariaGiorgi and FM @DZalkaliani as well with the chairman of the #Parliament of #Georgia, the Chairpersons of the #EuropeanIntegration and #ForeignAffairs Committees + Representatives of the Parl. Political Fractions 2/2

As of now the EUMM is not allowed in the regions to carry out monitoring, and only covers Tbilisi-administered territory.

Hahn and Gakharia spoke about the importance of strengthening international security mechanisms and a strong reaction of the international community to Russia’s illegal activities in Georgia,” the government of Georgia press office stated.

Gakharia said that Georgia is faithful to its Euro-Atlantic course and the state government does it utmost to preserve the achievements made in the EU-Georgia relations.

Hahn and Gakharia discussed the proportional elections in Georgia scheduled for 2020 and the court reform, the press office reported. 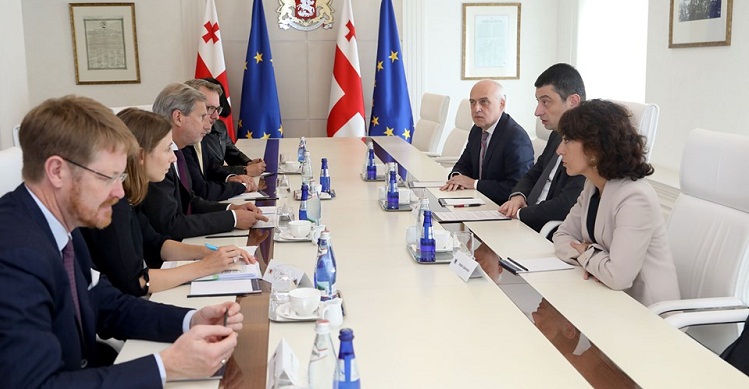 Georgian PM Giorgi Gakharia reiterated at the meeting that the country stands firm on its Euro-Atlantic choice. Photo: government of Georgia press office.

The current developments regarding the Georgian Supreme Court is in focus of the EU,” Hahn said, adding that it is important for Georgia to take all international recommendations regarding elections into account.

Hahn has already participated in the ground breaking ceremony of the first European School in Tbilisi and met the students of the New School, which opened last year.