Details of an important chapter of Georgia’s historical struggle for independence have been uncovered in vaults of a University of Oxford library in the United Kingdom, through a century-old petition addressed by the people of the country to a major international peace conference.

A "Petition of the Georgian People”, an appeal to the 1907 Hague Convention, was located through an effort by the university’s visiting researcher Beka Kobakhidze and Gillian Evison, Head of Oriental Section at the Bodleian Libraries of the institution.

The 25-page document outlines grievances of Georgia about the Imperial Russian policy towards the country, including an alleged contravention of the 1783 Treaty of Georgievsk between the Tsarist empire and the Georgian kingdom of Kartli and Kakheti. 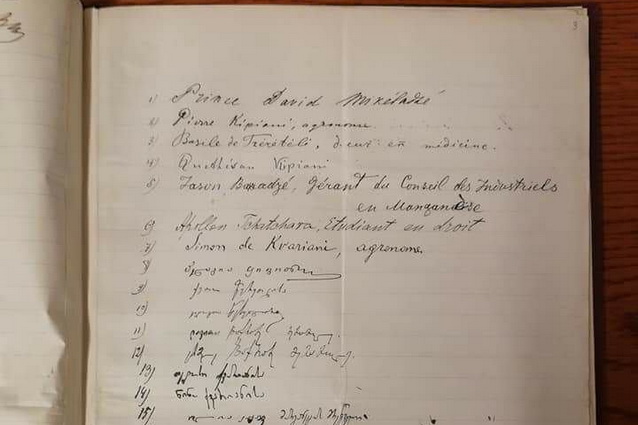 Signatures on the document were made in French, English and Georgian. Photo: Beka Kobakhidze.

Signatories of the paper also lament the annexation of Georgia by Russia that followed the latter’s breach of the treaty in 1801 — and lasted until the proclamation of independence by Georgia’s First Democratic Republic in 1918. They also charge the occupying powers with organising pogroms in western Georgia’s province of Guria between 1905-1906.

Signed by thousands of citizens of Georgia from various social classes and professions, the petition was addressed to the 1907 convention that involved negotiations of international treaties and declarations in the Dutch city.

The paper was reportedly initiated by Georgian anarchist and nationalist nobleman Varlam Cherkezishvili and edited for the Hague conference by Oliver Wardrop, an employee of the British Foreign Office at the time.

Its successful inclusion in the papers reviewed at the convention was celebrated by Cherkezishvili as "the first time in a hundred years that the world has spoken about Georgia” during the country’s struggle for independence.

The original papers remained out of reach for Georgian historians for much of the rest of the 20th century, with the Soviet rule imposed over the country between 1921-1991.

The petition was only seen by a few researchers from the country and never made public before now. 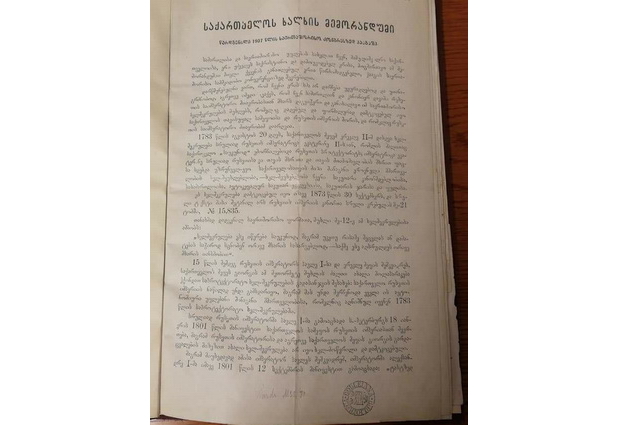 The main page of the 1907 petition. Photo: Beka Kobakhidze.

Kobakhidze, who asked Evison to undertake an effort for locating the mis-catalogued petition in vaults of the Bodleian Libraries, shared details of the finding with his social media followers.

The researcher said the document was notable for including signatures by notable public figures and artists like theatre designer Petre Otskheli and author Mikheil Javakhishvili, as well as ordinary citizens including farmers, workers and teachers.

The lists of signatories were ordered in the papers based on provinces of Georgia where they resided. A minor part of the signatures were signed in French or English by those who spoke the languages, with the rest in Georgian.

Kobakhidze told his social media followers he planned to work with a media outlet "over the next few days” to publish the entire list of signatures and thus enable Georgian citizens to find their ancestors on the historic paper.

The history researcher is in Oxford working on his monograph about the 1918-1921 Democratic Republic of Georgia through the prism of the West's politics.

Founded in 1602, the Bodleian Libraries bring together about 28 library venues in Oxford that preserve more than 13 million printed papers and materials from history.