The Prime Minister of Azerbaijan Artur Rasizade has confirmed his country’s commitment to further deepening its strategic partnership with Georgia.

After the face-to-face meeting with his Georgian counterpart Prime Minister Giorgi Kvirikashvili in Baku, negotiations continued in a wider format bringing together members of the two countries’ governments. 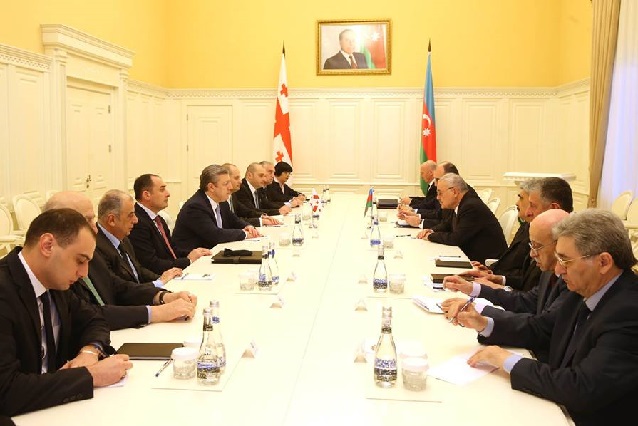 The face-to-face meeting between the two prime ministers was followed by a larger format meeting including other members of the Georgian delegation. Photo by the PM's press office

Ways to further deepen economic cooperation and prospects of holding a meeting of the two countries’ Intergovernmental Economic Commission were among the main issues of discussion.

Special emphasis was made on the regional and global importance of joint transport and energy projects. The parties also discussed the state of affairs in the region and pointed out the importance of maintaining stability and peaceful conflict-resolution.

Georgia-Azerbaijan strategic partnership, the further development of cooperation in various areas, and joint projects of regional importance were discussed during meeting with PM of #Azerbaijan Artur Rasizade. https://t.co/XVjnQUAkLRpic.twitter.com/bszbFdfXRM

PM Kvirikashvili believes Azerbaijan is Georgia’s special strategic partner and that the positive development dynamics in the bilateral ties are commendable.

Congratulating each other on the 100th anniversary of the establishment of the First Republics of Georgia and Azerbaijan the two prime ministers expressed hope that this date will be celebrated duly.