Georgian Facebook users have been spending their social media time writing to some of the most significant historical figures from the country’s history, following an anniversary project that has spawned public profiles of early 20th century personalities.

Within the media project, 10 Facebook profiles impersonating political and social persons from the First Democratic Republic of Georgia were created over the recent weeks to mark the 100th anniversary of the state.

Retelling stories from the 1918-1921 republic, the profiles feature fragments from notes, letters and memoirs of the people they were created to represent. 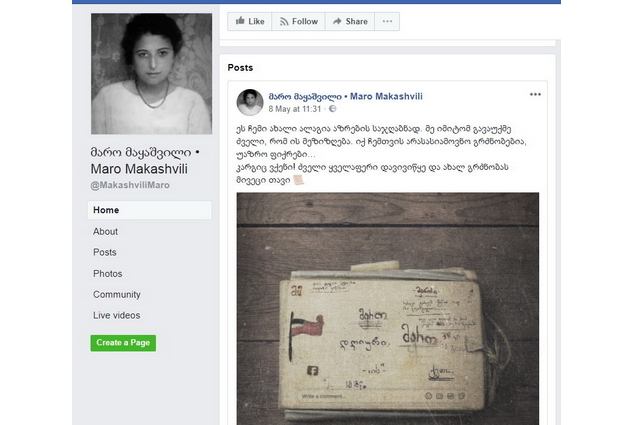 A page for Maro Makashvili, with an update about a diary of the young army nurse.

The personalities selected for the Facebook profiles include Maro Makashvili, a Georgian army nurse who died during the Soviet invasion of the country in 1921 and Ivane Javakhishvili, founder of Tbilisi State University, the earliest university in South Caucasus.

Among other figures are Noe Ramishvili, the first chairman of the government of the fledgling independent republic and Sando Akhmeteli, one of the founders of the contemporary Georgian theatre.

The pages were created with the idea of not only publishing short personal notes — posted with their original dates — but also engaging with users.

This has generated creative discussions in early 20th century talk between administrators impersonating the figures and their Facebook visitors.

The project was commissioned by the government of Georgia and facilitated by digital creative agency Leavingstone in collaboration with historians who worked through archives to select material for publishing.

A website with information on the selected historical personalities is also to be launched by organisers, as the state, educational and cultural agencies in Georgia are gearing up to mark the 100th anniversary of the 1918 independence date on May 26.