Today Orthodox Christians in Georgia are celebrating Mtskhetoba-Svetitskhovloba, a celebration of Georgia’s ancient capital city and its legendary cathedral.

Svetitskhoveli Cathedral, known as the burial site of Christ's mantle, is a Georgian Orthodox cathedral located in the historical town of Mtskheta, 20km northwest of the nation's capital Tbilisi.

It is one of the principal worship sites of the Georgian Orthodox faith and the place where many local monarchs have been crowned and laid to rest.

Each year on this day believers and guests traditionally visit Mtskheta. 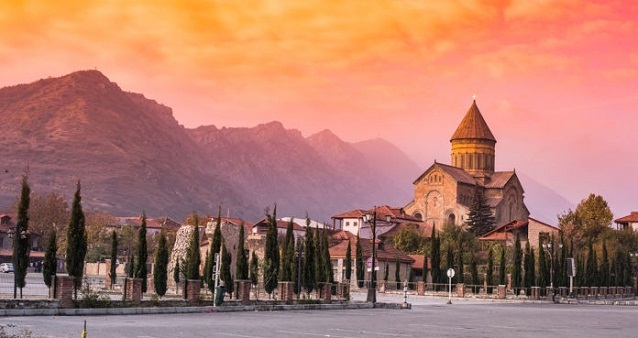 Svetitskhoveli has long been the principal Georgian church and to this day remains one of the most venerated places of worship. Svetitskhovloba pays homage to this Cathedral, whose name means 'Life Giving Pillar’.

The current Cathedral was built in the 11th Century by Georgian architect Arsukisdze, although the site itself was even older and dated back to the early 4th Century and was surrounded by a number of legends associated primarily with early Christian traditions.

It is the second largest church building in the country, after the recently consecrated Tbilisi Holy Trinity Cathedral. It is listed as a UNESCO World Heritage Site along with other historical monuments of Mtskheta. 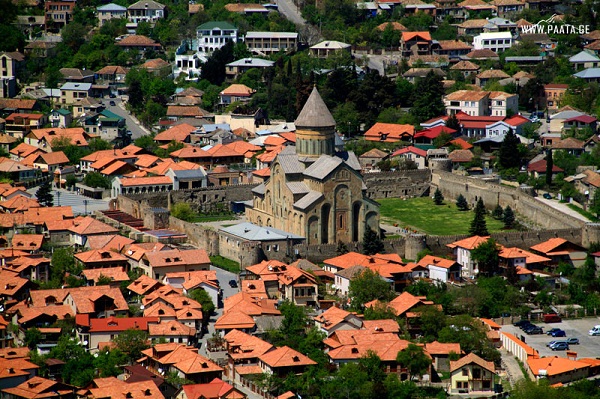 The original church was built in the 4th Century AD during the reign of Mirian III of Kartli (Iberia). Saint Nino, Equal to the Apostles and the Enlightener of Georgia, a woman who preached Christianity in Georgia, was said to have chosen the confluence of the Mtkvari and Aragvi rivers as the place of the first Georgian Church.

According to Georgian hagiography, in the 1st Century A.D. a Georgian Jew from Mtskheta named Elias was in Jerusalem when Jesus was crucified. Elias bought Jesus’ robe from a Roman soldier at Golgotha and brought it back to Georgia. Returning to his native city, he was met by his sister Sidonia who upon touching the robe immediately died from the emotions engendered by the sacred object. The robe could not be removed from her grasp, so she was buried with it.

The place where Sidonia was buried with Christ's robe was preserved in the Cathedral.

Later, an enormous cedar tree grew from her grave. Saint Nino ordered the tree to be chopped down to build a church and subsequently, seven columns were made from the cedar tree and used for the foundation of the church. The seventh column was believed to hold magical properties and rose by itself into the air. It returned to earth after Saint Nino prayed for a whole night. It was further said that a sacred liquid flowed from the seventh column which cured people of all diseases. 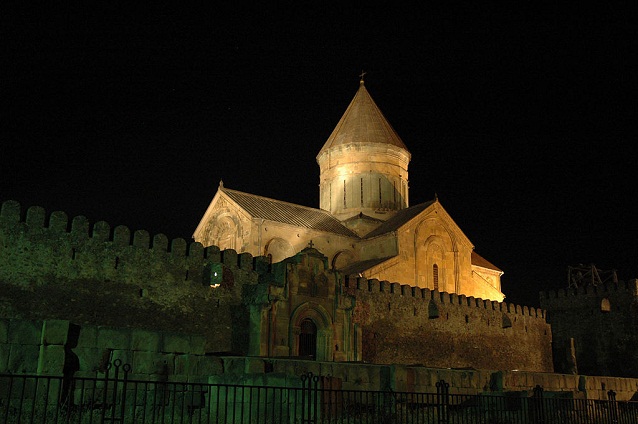 In Georgian "sveti" means "pillar" and "tskhoveli" means "life-giving" or "living", hence the name of the Cathedral.

Today, an icon portraying this historic event can be seen on the second column, located on the right-hand side from the entrance of the Cathedral. The image has been reproduced widely throughout Georgia and showed Sidonia with an angel lifting the column to heaven. Saint Nino is in the foreground while King Mirian and his wife Queen Nana were to the right and left.

Georgia officially adopted Christianity as its state religion in 317 A.D.