The UK’s Foreign Secretary Philip Hammond wrote this on Twitter following his meeting with Georgia’s Prime Minister Giorgi Kvirikashvili in Tbilisi this afternoon.

This was Hammond’s first Georgia visit.

"Your visit is particularly important to us and we consider it a sign of the unequivocal support of the United Kingdom to Georgia,” PM Kvirikashvili told the British official at a joint press conference following the meeting.

Kvirikashvili believed the visit of the UK Foreign Secretary would give a new impetus to the further deepening of cooperation between the two countries.

Statistics revealed the UK was Georgia’s second largest investor in 2015. Based on this Kvirikashvili said "Georgia is a reliable partner to the United Kingdom”.

Meanwhile the PM said trade turnover between Georgia and the UK in 2016 had grown by 41 percent when compared to the same period of last year. The overall turnover this year was 21.87 million USD.

The UK Foreign Secretary confirmed the UK supported Georgia's European and Euro-Atlantic integration and emphasised the progress achieved by the post-Soviet nation.

"Georgia is the country where making business is easiest and the country also is one of the leaders in fighting corruption.”

"This increases the potential of Georgia as a hub connecting Europe and Asia.” 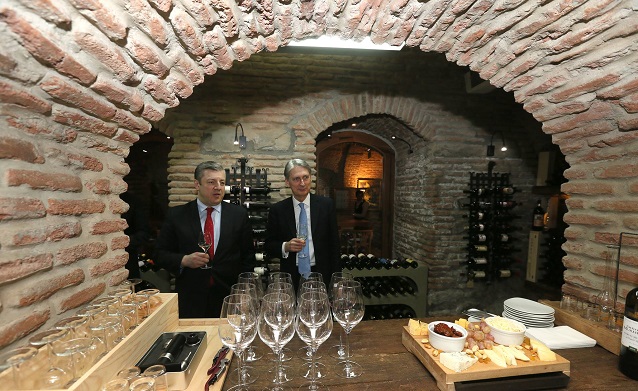 Ahead of the official meeting Kvirikashvili hosted Hammond at a business lunch. The British officials tasted Georgian wine and confirmed agriculture and tourism were the spheres Georgia and the UK could productively cooperate.

"Our next step is deepening our economic partnership,” Kvirikashvili said.

On first visit to #Georgia, paying respects to those who have died protecting Georgia's territorial integrity pic.twitter.com/NFFlx1InHr

At the beginning of his Georgia visit, Hammond paid respects to those who had died protecting Georgia's territorial integrity by laying a wreath at Heroes Square at the memorial of fallen heroes in capital Tbilisi.